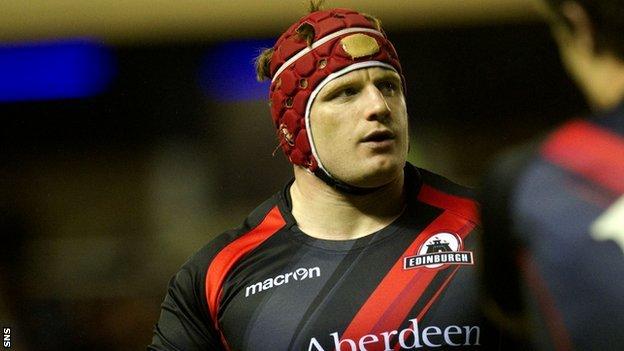 Kyle Traynor will make his first Scotland start against Tonga after being promoted from the bench to replace injured prop Ryan Grant.

Grant has a calf injury handing Bristol's Traynor, who has won three caps as a replacement, his chance.

Scrum-half Henry Pyrgos will also make his first start, one of six changes from the defeat by South Africa.

Alasdair Strokosch has recovered from injury to rejoin the back row, while Max Evans returns at outside centre.

Hooker Scott Lawson and lock Alastair Kellock are also back in the starting XV for Andy Robinson's side.

There are five changes on the bench as the Scots aim to recover from defeats by New Zealand and South Africa.

Edinburgh lock Grant Gilchrist could make his Test debut, as could 20-year-old Bath fly-half Tom Heathcote, while scrum-half Rory Lawson is included for the first time since the 2011 World Cup.

Traynor made substitute appearances Robinson's first three Tests in charge, the November 2009 matches with Fiji, Australia and Argentina, but has not featured since.

"I definitely thought it maybe had passed me by," said Traynor, who was an unused replacement for the losses to New Zealand and South Africa.

"It's quite a fickle game rugby, things can change in a very short space of time. Fortunately it's changed in a good way for me.

"I believed in myself, I worked hard, was honest with myself and sometimes you get opportunities and it's how you take it."

Open-side John Barclay and centre Nick De Luca are demoted to the bench after the 21-10 loss to the Springboks, while scrum-half Mike Blair, hooker Ross Ford and lock Jim Hamilton drop out altogether.

"This weekend we have to put together an 80-minute performance and build on the positive parts of our games that we showed in the last 30 minutes against South Africa and the second half against New Zealand," said Robinson.

"International rugby is about pressure and it's important that you convert your pressure into points and when you are under pressure that you are able to absorb it, as opposed to conceding points as cheaply as we have done.

"We will not be among the top eight seeds for the 2015 World Cup draw, so this weekend I'm looking at giving a number of players an opportunity to put their hand up for selection for next year."