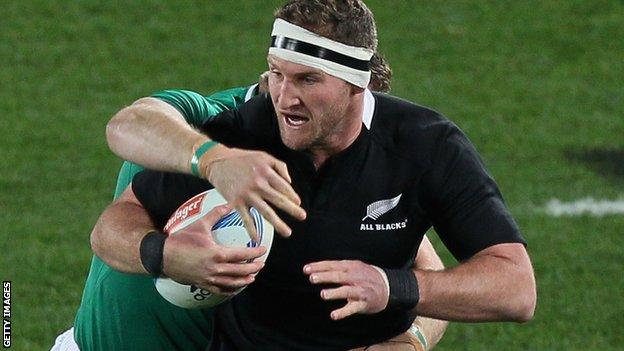 All Blacks number eight Kieran Read expects a battle to savour when they meet Wales in Cardiff on Saturday.

World champions New Zealand are overwhelming favourites against an out-of-sorts Wales side which has lost five consecutive matches.

The All Blacks, by contrast, are unbeaten in 19 games over the past 15 months.

"Not too long ago they were dominating European rugby and no team goes backwards that quickly," Read said.

"They are still a quality side and we respect them for that, and any team with their backs against the wall will come out fighting, so we expect that on Saturday night.

"Wales will raise their game, they will be a lot better across the board. They won't be happy with where they are at and in that position you really dig your heels in and look to come out strong."

Read captained New Zealand in the latest of those wins, a 42-10 success against Italy - a sharp contrast to Wales' autumn internationals so far.

Welsh spirits have been boosted by the return of head coach Warren Gatland after a spell carrying out duties as Lions coach for the 2013 tour.

He made his mark straight away by making five changes to the team for Saturday's match in Cardiff.

History is against Wales who have not beaten the All Blacks since 1953, but Read says his experience of playing Wales suggests it will be a tough day at the office.

"Over here it has generally taken us a full 80 minutes to wear them down," he said,

"I don't think we have ever had an easy game against Wales since I have been involved.

"They are a tough side and really come at us physically, so it is always a really tough game against them."