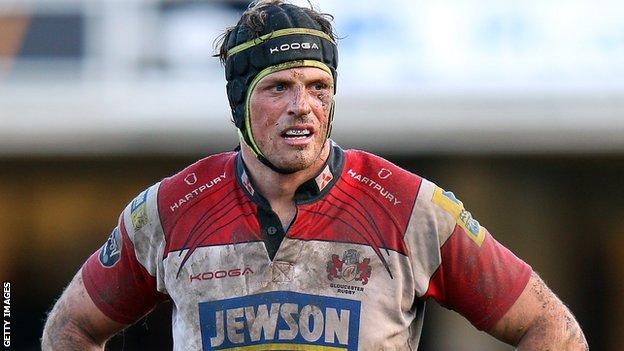 Gloucester lock Alex Brown has been ruled out for the rest of the season with a serious shoulder injury.

The 33-year-old former Bristol player has not featured since the opening day of the Premiership campaign against Northampton Saints.

"He has nerve damage and as a result of that he'll be out for at least the rest of the season," head coach Nigel Davies told BBC Gloucestershire.

Brown, who has three England caps, has been at Kingsholm since 2003 and has made 235 appearances for the Cherry and Whites.

He suffered an injury to his other shoulder last season, which restricted him to 12 Premiership games.

Davies confirmed he is now undergoing rehabilitation and has been helping the backroom staff.

"He'll certainly help in terms of his knowledge of line-outs, which he's been doing already," added the Welshman. "He'll still be a big part of Gloucester."

Brown is currently in his benefit year and is under contract at the club until the end of the season.