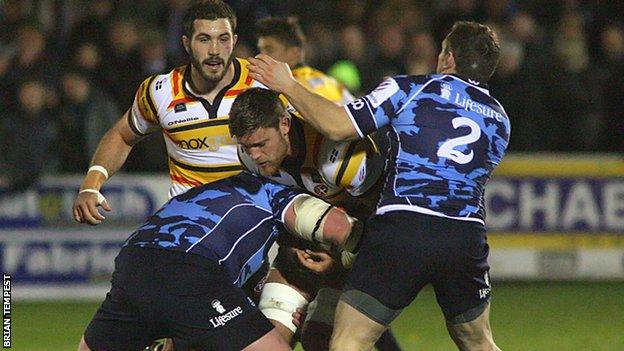 Cornish Pirates backs coach Harvey Biljon is unhappy at the way his side played in the 32-6 defeat at Bedford in the RFU Championship.

The Pirates saw their hosts kick six penalties and score two tries as their five-match winning run came to an end.

"The score at the end is not what frustrates me," Biljon told BBC Radio Cornwall after the match.

"It's the penalties that we gave away and we need to combat what they're doing at their set piece and the maul."

Jake Sharp kicked four penalties as Bedford led 12-0 at half-time before second-half replacement Kieran Hallett kicked two of his own to halve the deficit.

"In the first half we didn't get any ball," Biljon said.

"If you look at the first 40 minutes we probably only had the ball for four or five minutes and we weren't that accurate.

"In second half with the introduction of Kieran Hallett we got ourselves back into the game.

"We were putting on a bit of pressure and beginning to build phases and then we made couple of silly errors and Bedford hurt us.

"We needed territory and needed to get the ball and we didn't get either of those, and when we did get the ball we seemed to break down every time."