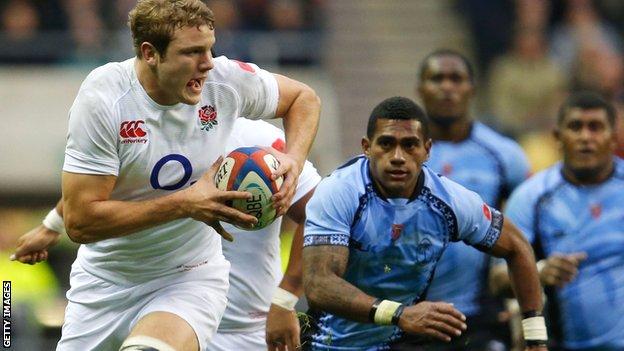 The lock, 21, replaces Wasps team-mate Tom Palmer, who drops out of the 23, as one of four changes to the pack.

Prop Alex Corbisiero starts in place of the injured Joe Marler, and Tom Wood and Ben Morgan come into the back row for Tom Johnson and Thomas Waldrom.

Ben Youngs is recalled at scrum-half, with Danny Care on the bench, while Mike Brown starts on the left wing.

The Harlequins full-back takes over from Charlie Sharples, who was also dropped from the match-day squad.

Head coach Stuart Lancaster has decided sweeping changes are in order following England's 20-14 defeat by Australia last weekend and in addition to the six changes to the starting XV, there are a further three on the bench.

Wasps flanker James Haskell, Saracens second row Mouritz Botha and London Irish centre Jonathan Joseph are all among the replacements for the first time this season.

Lancaster said the changes to the starting XV were "due to availability but also to freshen the team up - people are pushing hard in training".

"His impact in training has been very impressive for a young man. He's virtually error-free in his core skills."

Waldrom and Johnson pay the price as England look to beef up their back row against the famously physical South Africans, with Wood earlier this week relishing the "man test" posed by South Africa.

The 26-year-old is set to make his first start since last year's World Cup after recovering from a persistent foot injury and will form the back row alongside captain Chris Robshaw and Morgan.

Gloucester number eight Morgan and London Irish prop Corbisiero both appear for the first time since the second Test against South Africa on the summer tour.

Ben Youngs, who injured his shoulder at the end of that match, starts his first Test since the game in Johannesburg after edging out Care for the scrum-half shirt - it will also be the first time both he and brother Tom have both been in the starting XV for an England Test.

And Harlequins' Brown, normally a full-back but selected on the wing at Twickenham, starts for the first time since the opening Test of the summer tour.

Asked about that decision, Lancaster said: "Sometimes it's about getting your best players on the field."