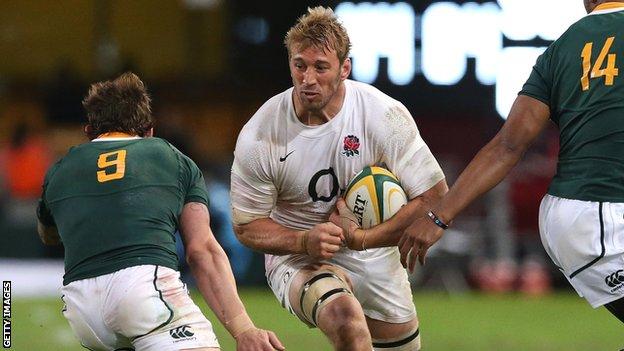 England go into Saturday's Test against South Africa on the back of a disappointing defeat by Australia last weekend.

England boss Stuart Lancaster has made six changes to the starting XV plus another three on the replacements' bench.

What do you make of the England team?

Six changes is a lot. I think Lancaster always had plans in his mind to make some changes, and injury is the reason for one of the new faces for Saturday, but I am surprised there are quite so many.

If you had a winning team it would be dangerous to make changes because they might affect the team's flow and understanding. But after the defeat by Australia he clearly feels it is time for plenty of new faces.

What is the biggest call?

The biggest change for me is starting with Ben Youngs at scrum-half - that decision surprised me. When he came on in the second half against Australia he knocked the ball on a couple of times and although he was busy, he lacked calmness and control.

Danny Care, apart from the box kick that led to the Wallabies' try, had a pretty flawless game, and the decision to relegate him to the bench is pretty hard on the Harlequins man. If I was him I'd be thinking I didn't deserve to be dropped.

If Ben Youngs is in there for his box kicking it's the wrong call because you won't beat South Africa playing them at their own game.

Pleased to see Joe Launchbury get a first start?

is big and strong and skilful - he really is an athletic individual and a great footballer. He's fit, full of energy and ambitious, and clearly one for the future. However, he's played most of the time in the back row for Wasps and he's got to adjust to the donkey work, as it were, needed in the second row.

At number eight we know the recalled Ben Morgan is a great ball carrier, but he's got to do more work defensively. And he should get plenty of opportunity against South Africa's big ball carriers on Saturday.

How should England go about beating the Boks?

I would like England to concentrate on themselves more than the opposition and in facing the Boks they have the ideal opportunity to do that, because South Africa will not have changed their playing philosophy one bit since the summer.

They'll look to box kick to work their way upfield, then send their big runners into action to try to hammer their way over.

England need to start where they finished off against Australia but get rid of the unforced errors, along with the unnecessary penalties.

The Holy Grail for this England team is quick ball, because to beat South Africa England must play at the speed they did in the last 20 minutes against Australia.

Against the Boks, England must get more of the ball carriers among the forwards coming from deep with pace, taking contact and off-loading to support.

With Ben Morgan and Mako Vunipola this should happen, but they have to be smart. Rather than just hit it up from one player out, they need to switch it two to three players out to outflank the huge Bok forwards.

Who will win the kicking duel?

England have got more kickers in Mike Brown, Alex Goode and Toby Flood, compared with Pat Lambie and Zane Kirchner for the Boks. The home side look to have an advantage here and it makes sense to use it by pinning the visitors back and not trying to play from your own 22m or 10m line.

Lancaster's men need to be smart - the start against Australia was not great and they must try to replicate the sort of high tempo they discovered in the last 20 minutes.

England have to believe they can use strike moves from anywhere on the pitch - but of course the closer to the South Africa try line, the less distance they have to go.

Where do South Africa have an advantage?

There's no one area where games are won and lost but the breakdown is always important, and South Africa will be hoping Francois Louw can give them an advantage there.

He's an excellent player and a classic "fetcher" of an open-side, as South Africans call the position, and Chris Robshaw will know all about him from the Premiership, where he plays with Bath.

Australia got an advantage through Michael Hooper at the breakdown last week but England should not focus on this to the detriment of their own game - like I said above, they need to concentrate on what they are going to do.

The Boks will come with the power running game from their forwards, particularly Willem Alberts, Adriaan Strauss and Duane Vermeulen, backed up by the fetching and turnover abilities of open-side Louw (who will wear the six shirt in the South African fashion).

The Boks also have perhaps the best scrum in the word, so it will be interesting to see how England go in that phase of the match.

So who's going to win then?

This is a really hard game to call.

We know how South Africa will play but it's more difficult to know how England will perform, and that makes it tricky.

England have made a lot of changes and it's asking a lot to expect a team to play well and have that immediate understanding when there are so many changes.

That's not to say they won't perform, and I think it's going to be a close game, but it's too close for me to call.