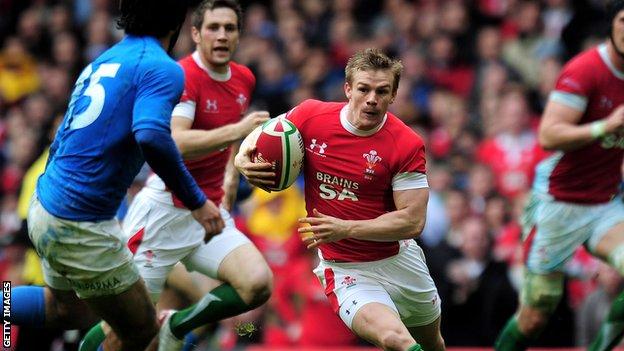 Sale Sharks scrum-half Dwayne Peel has not given up hope of representing Wales again, 20 months after his last appearance for his country.

While he acknowledges a return to the international scene is unlikely, Peel told BBC Radio Manchester he will never give up on the possibility of a recall.

"Obviously I'm not in the frame at the minute but I'll always chase it," said Wales' most-capped number nine.

"I had a great time playing for my country. It was a great honour for me and if I ever get the opportunity to again, I'll wear the shirt with pride.

The Six Nations champions have used Mike Phillips and Tavis Noyle at scrum-half in their last two games, with Rhys Webb and Lloyd Williams featuring on the summer tour in Australia, meaning Peel faces stiff competition for an international recall.

But the British and Irish Lion, who has played just seven times for Sale this season, remains unbowed.

"Having been injured [for six weeks with a shoulder problem] and come back fit, if I play well in the next couple of months, you never know what might happen," he added.

Wales, Grand Slam winners earlier this year, have lost both of their autumn international fixtures against and under interim coach, and former Wales scrum-half, Rob Howley.

for Saturday's match against New Zealand, and even if Wales are beaten by the world champions, Peel says there is no need for Welsh supporters to panic.

"We are underperforming as a team but that's not putting blame on players or coaches - it just happens sometimes," Peel said. "We know that those guys taking the field are good players.

"I've been in that situation for Wales before, where we've lost to teams that we should have beaten, and it's a tough place to be when things aren't going well. The spotlight is on you.

"Hopefully the guys can get out of the little slump they're going through, but there's no doubting the talent in the side."