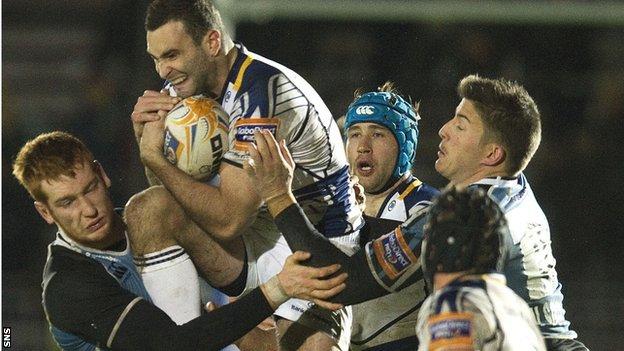 A penalty in each half by fly-half Ian Madigan earned Leinster a hard-fought RaboDirect Pro12 win over Glasgow in tricky conditions at Scotstoun Stadium.

Glasgow had several players available after their return from international duty with Scotland.

However, Gregor Townsend's men found it tough against an Irish side severely depleted by autumn Test call-ups.

Leinster are now fourth in the table, two points behind Glasgow whose run of six consecutive Pro12 victories ends.

It was an especially disappointing result for Townsend, who had targeted the match as a key one for his team to win.

Only Henry Pyrgos had made the trip to Aberdeen to play for Scotland against Tonga, while the Warriors were also missing Fijian Niko Matawalu.

The visitors took the lead after just five minutes, Madigan converting a penalty with a swift kick from 40 yards to calm any nerves the depleted European champions may have had.

Ten minutes later Glasgow found themselves defending for their lives on their own try line during a spell of play in which Leinster went through the phases.

The move failed to result in points, however, as a fumble by Madigan following a robust tackle by Josh Strauss drained the momentum out of the attack.

Leinster's dominance caused only frustration for the Warriors, leading to Tom Ryder entering the sin bin after a lack of discipline in the ruck after 24 minutes.

However, Madigan missed with the subsequent kick, ushering in a period where neither side managed to put together anything of real note.

Against expectations, the teams reached half-time without further addition to the score.

Despite pressure from Glasgow early in the second half it was Leinster who scored next as Madigan converted a routine penalty as rain started to fall eight minutes into the half.

With Warriors captain Chris Fusaro in the sin bin for preventing release of the ball, Glasgow still had the chance to cut the deficit with a Peter Horne penalty from the halfway line.

The chance, in cold and wet conditions, was missed.

Just before the hour mark Horne had the chance to redeem himself but his second penalty attempt was a genuine miskick, failing to get above head height.

Substitute Scott Wight, who replaced Ruaridh Jackson at fly-half, had no luck when he lined up another penalty for the home side after 63 minutes and his fluffed attempt could not get Glasgow's first points of the night.

Glasgow were to rue these missed penalty chances, and despite playing the remainder of the game in Leinster's half, the European champions held on for the win.