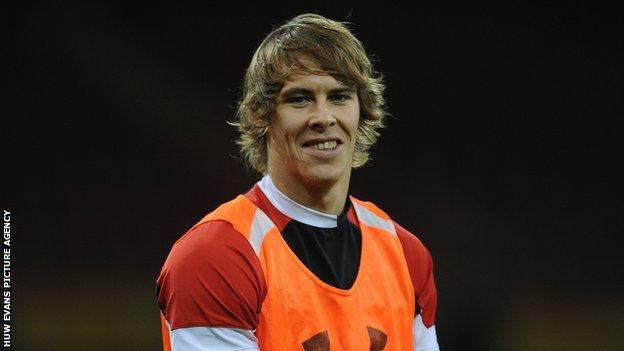 Wales assistant coach Robin McBryde is confident Liam Williams can thrive in the atmosphere of a Millennium Stadium Test against New Zealand on Saturday.

The Scarlets' back has replaced wing George North who suffered a hip injury in training on Tuesday.

Williams, 21, won his only cap against the Barbarians in Cardiff in June 2012.

"The signs are that he [Williams] can deal with it [the pressure], but there is only one way to find out," said McBryde.

"There is no denying it is a blow [to lose North], but we are fortunate to have someone like Liam, who has performed consistently well for the Scarlets, to fill in for him.

"You can prepare as much as you want, but it is not just a question for young players but for any senior international who has not faced the All Blacks, you don't know how you will react until you get in there.

"But Liam is quite grounded as an individual, he is well aware of the challenge ahead of him.

"One thing that is evident whenever he puts on the shirt for the Scarlets or for Wales is he is full of life, does not take a backward step and gives as good as he gets."

The loss of giant three-quarter North is the latest injury blow to hit Wales, whose team against New Zealand will now show six changes from the one that lost 26-19 to Samoa last Friday.

Wales had been due to field the same backline that had helped them to the 2012 Six Nations Championship Grand Slam.

That was after Scarlets centre Jonathan Davies had recovered from a groin injury to be reunited with Grand Slam midfield partner Jamie Roberts.

Ospreys trio Hibbard (shoulder), Evans (knee) and Biggar (shoulder) were all ruled out with injuries sustained during the bruising Samoa defeat.

New Zealand have suffered their own injury scare with star fly-half Dan Carter in training on Thursday.

An announcement on his fitness was due on Friday.