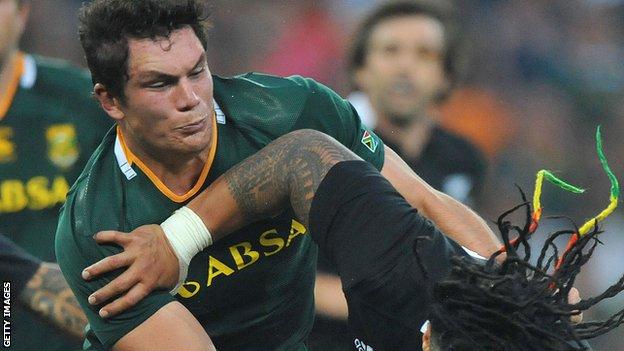 Listen to a full preview of this weekend's autumn internationals on 5 live rugby on Thursday, 22 November, from 2130-2230.

However much the game of rugby union is changing - and the South Africa coach Heyneke Meyer believes it is doing so "every six months" - there is no doubt that one area continues to prove crucial in the outcome of any match: the breakdown.

Last weekend - at Murrayfield, in Cardiff and at Twickenham - the southern hemisphere reigned supreme over the north, both on the floor, and on the scoreboard.

It is an area that the England head coach Stuart Lancaster has moved to address by making two changes to his back row, with Tom Wood and Ben Morgan returning to the fold.

However there have been calls for Lancaster to also include a natural 'fetcher' in the loose trio, for example Toulon's Steffon Armitage, one of the outstanding performers in France's Top 14.

But although the RFU is reluctant to pick those playing overseas, Lancaster's Springboks counterpart - Meyer - has included four men based in Europe in his match-day squad.

One of them is Bath's impressive flanker Francois Louw, who like Michael Hooper for Australia against England, was highly influential as the Boks disposed of Scotland.

Louw will be a key figure at Twickenham. Like all outstanding modern-day open-sides - such as New Zealand's Richie McCaw and the Wallabies' David Pocock - he combines guile and speed of thought at the breakdown with power and abrasion with the ball in hand. At 6ft 3in and almost 18 stone, he is the modern-day prototype breakaway flanker.

Meyer initially had reservations about selecting Louw, preferring a more specialist ball-carrier in the back row, but is happy to admit he has been won over.

"The breakdown is an unbelievable battle, and 'Flo' has been awesome and changed my mind," Meyer said this week. "Although he's superb on the ground, he's also a great ball carrier. I think he's the whole package and has been awesome for us."

When Louw signed for Bath in the summer of 2011, he was behind the likes of Heinrich Brussow, Juan Smith and Schalk Burger in the Springbok pecking-order, but managed to force his way into the 2011 World Cup squad. With that trio all sidelined by injury, he was also a regular in this year's Rugby Championship.

As well as being second best at the breakdown against Australia, England have also been warned they need to "toughen up" to mix it with the best of the southern hemisphere.

The return of Wood should add cussedness to the pack, and Louw has dismissed suggestions England will be easy to dominate physically. "Having played a year of rugby over here I know what the guys can bring on the weekend," he said. "It's going to be a physical onslaught. Stopping their momentum will be key."

"I know England have taken criticism but I think they can front up if they want. We're going to play the game that has been working for us, use our strong ball-carriers and play to our strengths."

Meyer also disagrees that the English pack is there for the taking. "When I coached at Leicester, I was impressed by the physicality, and my whole perception has changed about the toughness of the English players.

"In my mind the English players are a bunch of tough guys and they always bring it on physically. It's going to be a bruising, physical encounter - especially up front."

While England have rung the changes, Meyer named an unchanged starting XV, boosted by the availability of lock Eben Etzebeth, a young player the coach believes is "close to one of the best locks in the world."

But he is concerned that the last game of a long and draining season may take its toll on the Boks at Twickenham.

"Most of the guys, especially the loose forwards, have a lot of bumps and bruises. I always knew this last game was going to be very tough. I need one more great performance out of them, but I must say I am worried. A lot of the guys haven't been able to train and it's going to take a huge effort to be up for it mentally. But knowing these guys they stand up to the challenge. They are warriors.

"In the summer we had the edge because it was the end of England's season. Now England are fresh. You can see how Francois Louw is playing because it's only his 10th game (of the season)."

Meyer will therefore look to the bench, which is where another familiar figure will look to make an impact.

Hooker Schalk Brits has also been rewarded for his sparkling form in the Premiership for Saracens with an international recall, four years after his last caps.

"It was a dream that was fading away slowly," the 31-year-old told BBC Sport. "At first I thought it was a prank call, which has happened a couple of times - especially when some mates have had a couple of beers. I couldn't believe it until I spoke to Heyneke.

"It's been a great three weeks. Now for the biggy. When we sing the national anthem I'm going to have goosebumps running down my neck."

Listen to a full preview of this weekend's autumn internationals on 5 live rugby on Thursday from 2130-2230. Full commentary on England v South Africa on 5 live on Saturday, kick-off 1430 GMT.