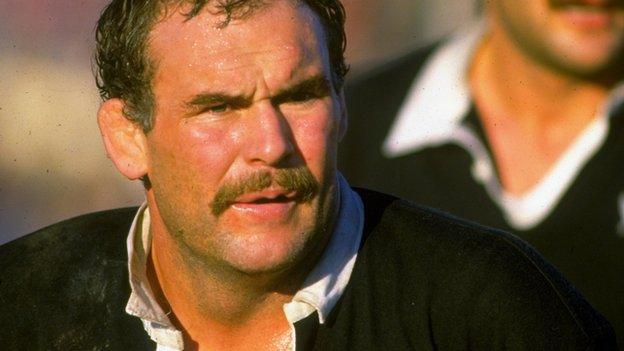 All Black legend Andy Haden says he has no regrets over his infamous "dive" from a line-out against Wales in 1978.

The incident resulted in a penalty which Brian McKechnie kicked to give New Zealand a 13-12 win in Cardiff.

"It was the only way to be able to conjure up a victory," Haden told BBC Radio Wales' Back Page programme.

"And I've lived with it and I don't regret it because that's what you do for your team - you do whatever comes into your mind at the time."

The incident still rankles with Welsh fans and players 34 years after the event, even though there is a question mark over whether Haden's dive actually resulted in the penalty.

English referee Roger Quittenton has said he penalised Welsh lock Geoff Wheel for a barge on Frank Oliver, the other All Black second-row.

I don't really dwell on it that much these days, it's just part of the folklore of the game

However, Oliver also appeared to dive. Whatever the truth of the matter, Haden is clear that the All Blacks had a plan if they were losing the match.

"And you don't talk about it, and rehearse it, think about it in your mind and not do it.

He remains convinced he did the right thing.

"You do whatever you have to do at the time and get the job done.

"I don't really dwell on it that much these days, it's just part of the folklore of the game."

That is 48 places lower than the underarm ball bowled by Australian Trevor Chappell against New Zealand during a one-day cricket international in 1981.

Ironically, the New Zealand batsman that day was the McKechnie, who had kicked the penalty to beat Wales three years earlier.