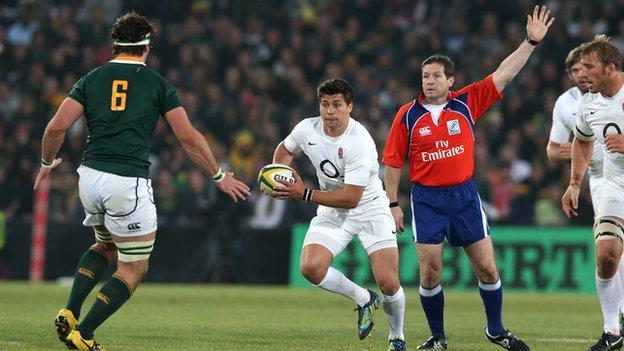 England scrum-half Ben Youngs has vowed to keep playing his instinctive game despite being criticised for his decision-making against Australia.

I'll stand beside Tom at the anthem. He's my brother - I want to be shoulder to shoulder with him

Youngs has been picked to start ahead of Danny Care against South Africa on Saturday as one of six changes to the side beaten 20-14 by the Wallabies.

Leicester number nine Youngs said: "I'm an instinctive player - it's the way I play and I won't change it.

Youngs, whose brother Tom will start at hooker, added: "If I have it knocked out of me then I won't be the player I want to be. If it's on I'll go.

"If I get it wrong I'll hold my hand up. I got it wrong against Australia, but there have been times when it has worked."

After coming on as a second-half replacement last Saturday, Youngs took a quick tap-penalty from a kickable position and then watched as his forwards failed to turn it into points.

Care had made the same decision in the first half and been rewarded when Manu Tuilagi crossed for England's only try in a disappointing display, and Youngs admits that his decision haunted him after the game.

"I jumped into my car and drove straight home, just to get away. Otherwise I'd have moped about the hotel the following day giving myself a kicking," he revealed.

"When you make a mistake you know you've made it. At that moment I didn't expect to start this week.

"But Stuart spoke to me and said he feels I'm best suited to start this weekend. I know when I'm on song it goes all right, and hopefully that will be enough to lead us to a position to win the game.

"I wouldn't change the position I play. I love that pressure to make the big calls and do the right thing. It comes with experience, the more you play the better you become at it."

Lancaster's surprise decision to pick the Leicester man over Care means Youngs will start alongside older brother Tom for the first time at international level.

Tom started against both Fiji and Australia but Ben has been on the replacements' bench on both occasions.

"It will be a great moment," says the scrum-half. "To be playing alongside your brother in an England shirt at Twickenham is going to be pretty amazing.

"I'll try to feed off that emotion and energy and try to put it into my performance.

"I'll stand beside him at the anthem. He's my brother - I want to be shoulder to shoulder with him."