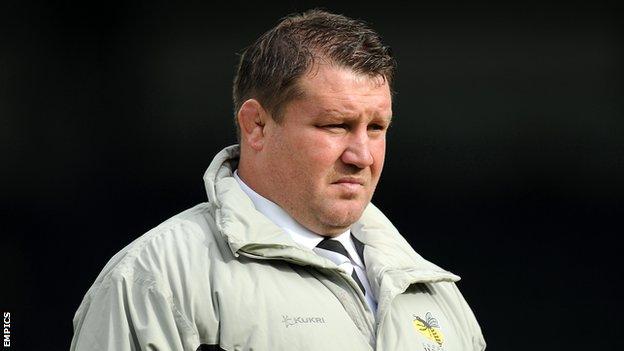 Lock Joe Launchbury will make his first Test start for England against South Africa at Twickenham on Saturday.

"We want to be sending five, six, seven or eight players to England on a constant year-after-year basis.

"Joe is one of probably three or four of our outstanding youngsters who will get recognition shortly," Young told BBC London 94.9.

"Joe is not a star in the making. He is already a star and is he starting to prove that."

Lock Tom Palmer was the only Wasps player to be named in England's elite player squad in the summer, while Launchbury was included in the second-string Saxons squad along with scrum-half Joe Simpson, winger Christian Wade and back-row forward James Haskell.

"Of course it [international call-ups] causes problems, but it's a nice problem to have and part of my goal," Young continued.

If you are trying to develop something, you have got to build a fortress mentality at home. We've done well up to date but this is a step up as we are playing one of the real giants in English rugby

"There isn't much Elliot Daly doesn't have in his locker, while Billy Vunipola is still only 20 and his yardage game is as good as anything about.

"There's Christian Wade on the wing and Sam Jones, who slips under the radar a little bit.

"We've got a number of youngsters I believe who may not be pushing this season, but will be there or thereabouts come the next World Cup [in 2015]."

The two sides won four league titles each during the 2000s but Wasps faced a relegation battle and financial problems last season, while Tigers have finished runners-up in each of the last two campaigns.

Despite that, Young says the rivalry between the two sides has not faded.

"Obviously we've had a couple of lean years but it hasn't taken any of the rivalry away," he added.

"It's built on a real mutual respect for each other. From when I am they are still a team we all aspire to beat and emulate.

"Both of us, certainly ourselves, have improved from last season. They've continued their consistency of being one of the top performers in England.

"You don't achieve what they have achieved over the years with a poor squad. We don't see the challenge being any less."