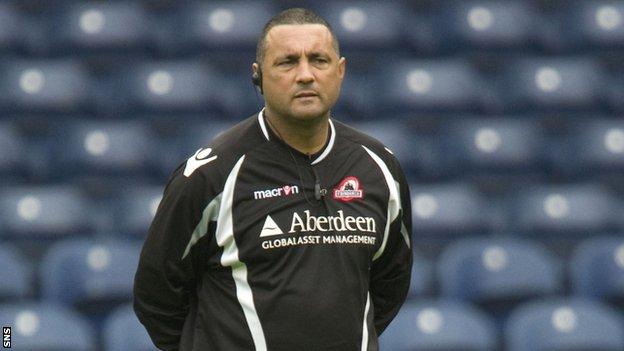 Prior to the 23-13 Murrayfield victory over the Welsh side, his team had lost six of their eight Pro12 games and had lost both Heineken Cup ties.

"We needed a win and we needed it as quickly as possible," said Bradley.

"We just seemed to be that little bit sharper today. When the ball landed on the ground there was an Edinburgh player there first."

Gregor Hunter scored 18 points for the capital side, with a well-worked Willem Nel first-half try the other highlight of a match against an Ospreys side who arrived on the back of five wins on the trot.

The Welshmen had led 13-8 at half-time thanks to Matthew Morgan's try and conversion and two penalties.

Reflecting on the match, Bradley told BBC Scotland: "The boys fought for the full 80 minutes today.

"Neither side was at full strength but that didn't matter, in the sense that we needed to show character to get over the line.

"We had a couple of hairy moments in the last few minutes with a block-down but everybody got behind and the defence was magnificent.

"We got a turnover and we had to work our way back up to get the bonus kick to go 10 points ahead.

"Those matches can go either way and unfortunately for us they have all gone against us and we needed to get something back."

The Irish coach also paid tribute to the 3,128 fans for their backing in the cavernous stadium.

He said: "We have had a very frustrating six or seven matches in a row in terms of results but the crowd was fantastic today, they got behind the players.

"They appreciated that the boys were doing everything they could to maintain the lead.

"We got a magnificent try in the first half and Gregor closed the game out with the kicks. He knocked over some fantastic penalties to ensure the win.

"At last there is a happy dressing room in Edinburgh Rugby today."

Edinburgh's next match in the Pro12 is away to Connacht next Saturday.