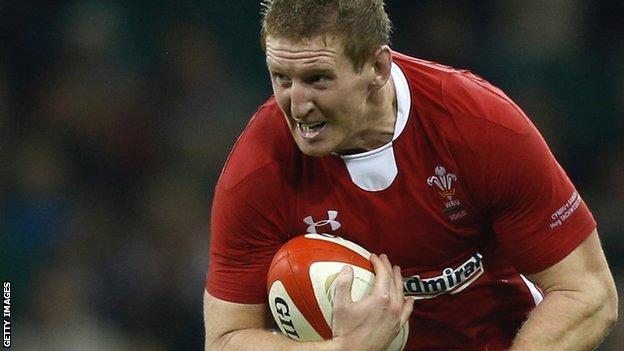 Wales have been forced to delay announcing their team for Saturday's final autumn Test against Australia until Thursday because of injuries.

Prop Aaron Jarvis, who has knee damage, and lock Bradley Davies, concussed after being hit off the ball in the 33-10 defeat to New Zealand, are both out.

Doubts remain over five other players.

Jamie Roberts and Ryan Jones were forced off on Saturday, while George North, Dan Biggar and Ian Evans are also hoping to recover from injuries.

The good new for Wales was that lock Evans took part in training on Tuesday.

But centre Roberts (hip) will not train in the early part of this week and back-row Jones (head) has stitches and will take a limited part in training until the end of the week.

Fly-half Biggar (shoulder) was due to resume some rugby training on Monday afternoon after being forced off in the defeat by Samoa. The Welsh Rugby Union say he is not yet ready to take contact but is hoping to be in contention later in the week.

Scarlets wing North (hip) is continuing his rehabilitation and also remains in contention to return after being forced to withdraw from the side to face the All Blacks.

Jarvis will undergo further consultations to determine whether he needs surgery on the knee injury that saw him taken off on a stretcher in only the second minute on Saturday.

With Adam Jones and Craig Mitchell already sidelined for the whole series, Wales are now without three tight-head props. Scott Andrews of Cardiff Blues, who came on for Jarvis, is likely to start.

With Davies joining fellow lock Alun Wyn Jones (shoulder) on the unavailable list and uncertainty over Evans, Blues second row Lou Reed has been made a full squad member after training with the team last week.

Luke Charteris (Perpignan), Gethin Jenkins (Toulon) and Mike Phillips (Bayonne) have all remained with Wales, but Paul James (Bath) and James Hook (Perpignan) have returned to their respective clubs.

With Jarvis, Davies and James all unavailable, there will be at least three changes to the starting XV.

Davies has returned home after spending Saturday night in hospital after suffering concussion from an act of foul play by New Zealand's Andrew Hore, who has been cited.

Davies was hit from behind by hooker Hore in the second minute of Wales' 33 -10defeat and was unable to continue.

And Howley condemned Hore's off-the-ball act of violence on Davies.

"What Hore did has no place on a rugby field as far as I'm concerned - it's an absolute disgrace," he said

"Obviously he's been cited, and I'm sure the citing commissioner won't take it too lightly."

Hore will face a disciplinary hearing on Wednesday.