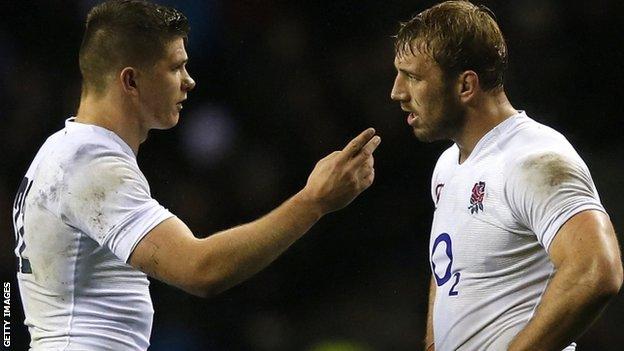 For a second Saturday in succession at Twickenham, England's inexperienced team were left with "what ifs?" and "maybes" rather than the southern hemisphere scalp they so desperately wanted.

A week ago, over-ambition was blamed as kickable penalties were spurned in search of tries in the 20-14 defeat by Australia. On a soggy Saturday against a prosaic if determined South Africa, they went the other way and

With the Springboks leading by four points and two minutes left on the clock, England were awarded a penalty 25 metres out. Skipper Chris Robshaw had a stark choice to make: take the three points and hope to secure position from the restart for three more, or kick for the corner and gamble instead on stealing five points from line-out and drive.

"Unfortunately it was probably the wrong call. You have to judge every game as it comes and get a feel for it. That falls on my head. At the end of the day, I have to make those decisions."

These are the moments that can haunt a leader for night after sleepless night. Decide in an instant, live with the repercussions for an age.

Stick or twist? Red or black? Kick or corner?

That Robshaw looked at Owen Farrell and pointed to the posts took his fly-half as much by surprise as it did the crowd. That the three points came but neither the minutes nor opportunity for any more left the captain with hands on head and some spectators bellowing their disbelief.

First, the case for the defence. Robshaw, regardless of the lessons or criticisms of last week, had several key variables to run through his weary loaf.

Was there sufficient time for another attack? Would England make something of it? Could enough territory be made to give Farrell a chance to drop for goal, or would enough pressure be exerted on a tired defence to trigger a South African infringement and a penalty to win it?

Turn it round. What would a line-out and drive realistically bring? The ball was slippery, his forwards' handling poor. The line-out had creaked constantly; a penalty kicked to touch a few minutes earlier had yielded nothing. The South African defence, tested throughout, had never looked like being breached.

Decision made, job done. Except, in Robshaw's case, it wasn't. There were suggestions from those listening to the referee's microphone that he attempted to reverse his call, only for Nigel Owens to turn him down.

Precious seconds were wasted while a kicking tee was found, more while Farrell gathered himself. Then, when the restart came and appeared to be going straight into touch, Mouritz Botha fumbled the take.

With the loss of possession went the match; with the match went more of the optimism that once surrounded Stuart Lancaster's new-look England regime.

Afterwards, the coach was robust in defence of his captain. "We've got lots of decisions we make in a game. We will sit down as a group on Monday morning when emotion has gone from the game and we discuss them all.

"Some we get right, some we don't get right, and that's the same for any team's development. We back the players and support them. We review it and see if we can do it next time."

Springbok coach Heyneke Meyer, while diplomatic, let a little more slip. "I feel for [Robshaw] because he's in a lose-lose situation. If he kicked for the corner we would have contested it well. But in a sense, I was relieved."

Pivotal points are also never more noticeable than at the very death. In truth, as in many close contests, there were other moments that could have proved just as critical.

Toby Flood, on a disappointing day for England's most experienced player, missed two first-half penalties that on other days he would have landed.

In the same period he put his grubber kick from 10 yards out into touch rather than the path on the onrushing and unmarked Manu Tuilagi; shortly afterwards, Ben Youngs opted to kick rather than run precious turnover ball with an overlap opening up on his outside.

In defeat there was also much to like about England's display. If forwards coach Graham Rowntree was guilty of exaggeration afterwards - "At half-time we had our foot on their throat. We could have been 15 points up - the home scrum was certainly superior and the back row much improved. To the surprise of the stereotypes, England were winning the physical battle.

"Let's not forget South Africa are the second best team in the world and England will be absolutely devastated they couldn't go on and win it. I think we must remember Chris Robshaw is a relatively inexperienced player and doing a great job, but kicking for the corner was the right option at the end. I was a little bit surprised at the decision to turn down a penalty on the halfway line before that which would have given them the opportunity in the last five minutes to go on and win the game. I do think England did a lot better today and played the conditions very well. They will count themselves unlucky and rue a fortuitous South Africa try, which kind of dealt them a hammer blow, and some of those Toby Flood missed penalties in the first half, as well as those key decisions in the second half."

South Africa's try was fortunate in the extreme, a ricochet that fell the only way it could that would allow Willem Alberts to both gather and not be offside. Young buck Joe Launchbury looked every inch an international player and his fellow lock Geoff Parling also impressed in the loose, while Tom Wood justified his recall at blind-side.

There was also plenty to concern.

Conditions were difficult, the opposition ranked as the second best team in the world. But there were problems excused by neither in too many areas.

The line-out, rock solid against Fiji and Australia, malfunctioned as Tom Youngs struggled to keep his throw straight.

Neither Flood nor Farrell impressed in comparison with their opposite number Pat Lambie, struggling to fire their attack and free their runners.

For all their 60% of territory and 58% possession, England seldom looked like crossing the try line. A midfield big on denting and defence still shows little sign of developing a cutting edge; South Africa made 155 tackles to England's 79, but the home side's best chance came from interception not inspiration.

"The pleasing thing from my point of view is that you can't question the character of this England team," said Lancaster afterwards.

"You might have been able to in the past, but you can't with this one. We didn't win, but there's enough there from a young side to give us the confidence to believe in the long term we will."

For the first time in his time in charge, he also looked rattled.

"We're desperately disappointed not to win the game," he admitted. "It was a game we could and should have won."

His side have now emerged victorious in only one of their last six games. Only the incurably optimistic expect that run not to stretch to one in seven.

This was not how the autumn was supposed to work out. Two wins from four were considered the minimum return. With New Zealand in town next week and on a regal roll even by their standards, the immediate outlook at least is as grey as the clouds that drenched south-west London throughout this dispiriting defeat.