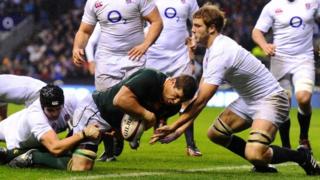 England slip to a narrow 15-16 defeat at the hands of South Africa in their Autumn Test international at Twickenham.

The Springboks scored a fortuitous try at the start of the second half through Willem Alberts.

England's efforts ended controversially when they opted to kick a late penalty rather than go for the try that would have put them in front.