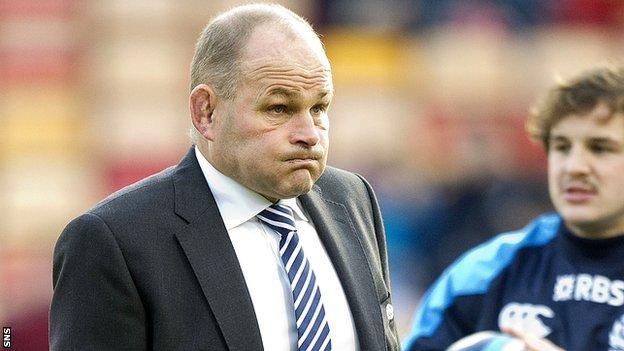 Andy Robinson has ended his three-and-a-half year reign as Scotland's head coach after a disappointing run of results.

He was clearly stung by Scotland's 21-15 defeat by Tonga on Saturday when he warned there would be "consequences".

In a statement issued on Sunday, Robinson spoke of the "privilege" of being in the Murrayfield role and thanked supporters, players and staff.

Scottish Rugby will begin their search for Robinson's replacement immediately.

The defeat by Tonga in Aberdeen followed two other autumn Test defeats, by New Zealand and South Africa at Murrayfield, no disgrace considering that pair's lofty ranking in world rugby.

But Scotland needed two autumn Test wins from three to secure a top-eight seeding for the World Cup in 2015.

Instead, they have slipped to 10th, two places ahead of the Tongans.

The team have lost 10 of their last 13 matches, including being knocked out of the World Cup in New Zealand last year at the group stage for the first time.

The role of a national coach is to organise and with the minimum of fuss. There should be no smoke and mirrors, no promises of some rugby nirvana, no interminable meetings and talking

A 2012 Six Nations wooden spoon followed, losing all five games, but Robinson and the team were boosted by a trio of wins in Australia, Fiji and Samoa in the summer tour.

However, the home defeat by the team from the South Pacific was the final straw for Robinson, who had been in charge of the national team since June 2009 and whose contract was due to run until the World Cup in three years' time.

After the match he spent 10 minutes in discussion at the side of the Pittodrie pitch with Mark Dodson, Scottish Rugby's chief executive.

A grim-faced Robinson told the BBC after the game: "I'm very angry - there will be consequences because of this performance. It reflects on me.

"I've got to look at myself, as has everybody involved."

Having mulled things over on Saturday night, Robinson issued a statement on Sunday morning.

It read: "It's been a privilege to be the head coach of Scotland and I'd like to thanks the fans, players, coaches and staff for all their support over the years.

"I have thoroughly enjoyed working with the players and the coaches in the last few years.

"I believe I have left the team in a better position than when I took over and have great confidence in the players and the coaches for the future.

"I am very disappointed by our recent results but I have belief in the players to develop into a winning team."

Dodson issued a statement saying "a change in head coach is required to take the team forward and build towards the Rugby World Cup in 2015".

And he added: "I have passed onto Andy Scottish Rugby's thanks for his hard work and commitment during his term as national coach.

"Andy has overseen some fine results as Scotland head coach since he was appointed in June 2009 but the recent defeats have been very disappointing.

"Andy is an outstanding leader and a fine coach and we wish him well."