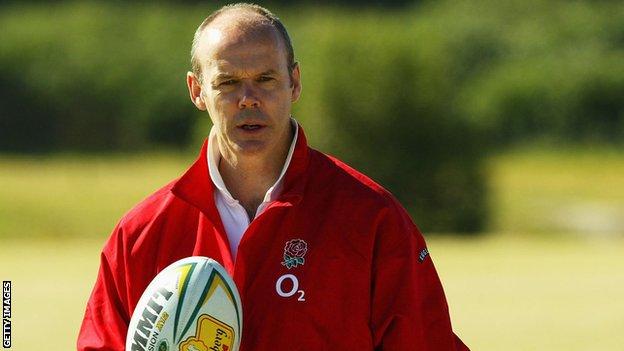 The flanker, 26, has been criticised for opting to kick at goal when England were trailing 16-12 to South Africa with just over a minute left.

If follows last week's controversy when England spurned two kickable penalties during their defeat by Australia.

Woodward said: "Robshaw is a fantastic player, a fantastic captain. I expect him to be captain in the Six Nations."

The 26-year-old was named England skipper for the autumn internationals after leading his country during this year's Six Nations and the summer tour of South Africa.

But his decision-making has been questioned in recent weeks, with former England scrum-half Matt Dawson describing Robshaw's call to kick at goal against South Africa as "baffling".

While the captain himself admitted he made the "wrong call" in the dying minutes on Saturday, the man who masterminded England's World Cup triumph in 2003 told BBC Radio 5 live's Sportsweek programme that there was no "right or wrong" decision.

"If they were going to go for goal they had to do that kick within about 10 to 15 seconds. If they'd done it really quickly then it is absolutely the right decision," said Woodward, who resigned as the British Olympic Association's director of elite performance in October.

"Also, to be brutally honest, I don't think England looked like scoring a try against South Africa so the chances of England scoring a try in that two minutes were quite minimal.

England appointed Stuart Lancaster as their head coach in March after a period as interim boss during the Six Nations.

Woodward described the 42-year-old as a "rookie coach" in charge of an inexperienced team which needed "everyone's support".

"You're going to have these situations, it's not easy," said the 56-year-old.

"You're playing the best teams in the world. I thought they fronted up to South Africa but, if we're honest, South Africa were seven or eight players short of their front-line team.

"It's a team in development and a coach in development but if you're going to make those appointments you've got to actually now back them totally to make sure we see this through."