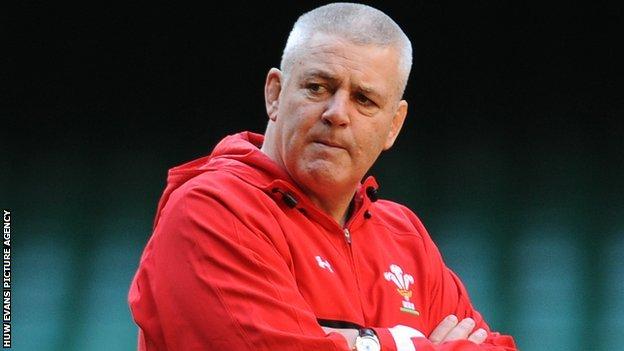 Wales must avoid defeat against Australia on Saturday to stay in the top eight of the International Rugby Board's world rankings.

If Wales lose they will fall to ninth place below Argentina and Samoa, and face a much tougher draw for the 2015 World Cup.

That would see the Grand Slam champions ranked alongside Italy, Tonga and Scotland in tier three of the seedings.

The draw for the World Cup is being made on Monday, 3 December.

The seedings for the World Cup draw will be based on the rankings.

Wales, semi-finalist at the last tournament, moved up one place to seventh in the new IRB rankings published on Monday, following their 33-10 defeat by New Zealand on Saturday.

The weekend results mean that the top four ranked teams in the draw are confirmed as New Zealand, South Africa, Australia and France.

England and Ireland are secure in fifth and sixth places respectively, but the last two places in the second pot for the draw will be between Wales, Samoa and Argentina.

Ireland beat Argentina 46-24 on Saturday, but the Pumas and Samoa have both beaten Wales this autumn.

The match against the Wallabies is an extra fixture outside the IRB's autumn international window, as is England's clash with the All Blacks at Twickenham.

A Welsh victory over the Wallabies would end a run of six consecutive defeats for Wales, with three of those coming against Australia.

It would also mean Argentina missing out on a place in the second tier by a tiny margin.

The IRB has had to go to 15 decimal places to separate Samoa from the Pumas.

A country cannot be drawn against another from the same seeding group in the World Cup.