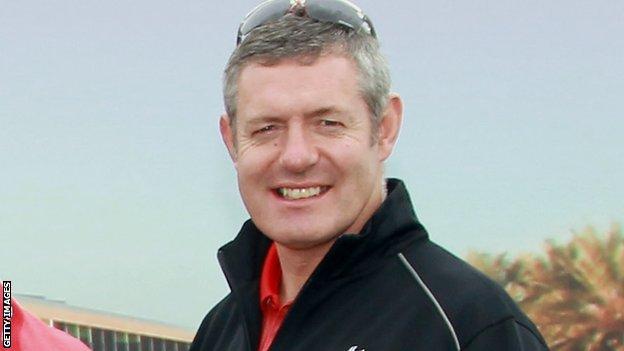 Former Scotland captain Gavin Hastings says he is saddened by Saturday's humbling by Tonga and the resignation of head coach Andy Robinson.

Robinson stepped down after the shock 21-15 loss at Pittodrie, the team's 10th defeat in their last 13 Tests.

"Let's face it, Scotland really are at the bottom of the pile at the moment," Hastings told BBC Radio 5 Live.

"It's so sad that we are talking about the team I just absolutely love. We really are not at the top table now."

Robinson ended his three-and-a-half year tenure on Sunday morning, making good on his warning the day before that the defeat by the South Pacific team would bring about "consequences".

In his resignation statement, the Englishman said: "I am very disappointed by our recent results but I have belief in the players to develop into a winning team.

"I believe I have left the team in a better position than when I took over and have great confidence in the players and the coaches for the future."

Asked if the Scots were indeed better placed than in June 2009, Hastings, said: "In terms of world rankings, no. That is the short answer.

"Having said that, I've had a lot of faith in Andy Robinson and that faith has not been lost.

"The trouble is, of course, that the coaches lose their job and the players don't.

"It's easy for the players to say it was the coach's fault.

"I think the players have got to take more of the share of the blame in this.

"That performance was not good enough and people who were wearing the dark blue jersey of Scotland should be ashamed of being part of that team yesterday because it was a poor performance and it is easy to blame the coach."

Prior to the defeat by Tonga, Scotland were 10th in the world rankings, but the loss will mean a further drop to 12th, with the team already short of the top-eight placing it craved for the 2015 World Cup.

Hastings, who won 61 Scotland caps from 1986-1995, added: "Andy is quoted as saying the players didn't follow the tactics.

"If that is the case then clearly Andy has lost the players and he has paid for that with his job.

"Scottish rugby is at a low point.

"I don't think anyone has answers that are going to help Scotland's situation over the short term.

"It is very much a longer-term process leading in to 2015 that needs to happen now."

Rugby commentator Iain Robertson said Robinson "hasn't been anything like a failure", highlighting that at last year's World Cup, at which the team failed to progress from the pool stage for the first time, Scotland had lost to Argentina by a single point and had led England until late in the match before losing 16-12.

He pointed out: "One extra try in each of those games and they'd have won the pool.

"They have beaten Australia home and away in the last couple of years and beaten South Africa, but over the piece bottom in the Six Nations and this [Tonga] result is the last straw.

"I think he has felt that he has done everything he can for Scottish rugby and it is probably the right time to go."