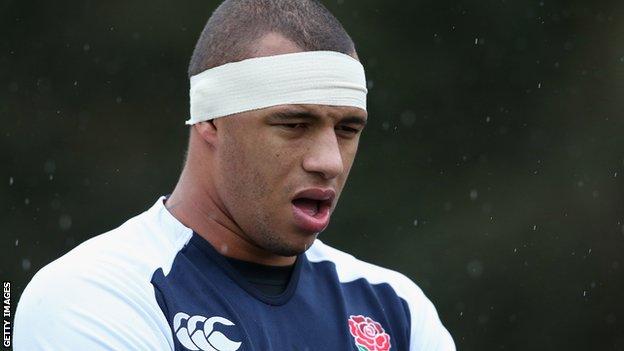 England are set to keep changes to a minimum for Saturday's final autumn Test with New Zealand after releasing 11 players back to their clubs.

With fly-half Toby Flood ruled out with ligament damage in his big toe, Owen Farrell is set to start at number 10.

Freddie Burns will feature in the match-day 23 for the first time, with Courtney Lawes back from injury after missing the first three autumn Tests.

Fellow locks Mouritz Botha and Tom Palmer are among the players released.

Farrell's last start for England was the first Test on tour in South Africa this summer.

Lawes, who won the last of his 14 caps against Wales in this year's Six Nations, damaged his knee playing for Northampton against Saracens on 27 October but played nearly an hour for Saints in their Premiership win over London Welsh last Saturday.

Prop Alex Corbisiero, who is resting a knee problem, did not train on Tuesday but Lancaster says there is "every chance" the London Irish loose-head will "pull through" to be named in the side on Thursday.

Burns has been in superb form for Gloucester this season, earning plaudits for his attacking style and improved game management.

England will be looking to get back to winning ways against the All Blacks after a disappointing 20-14 defeat to Australia was followed up by a 16-15 loss to South Africa.

The All Blacks, unbeaten in 20 Tests since the start of their victorious World Cup campaign last September, anticipate a "huge battle" at Twickenham despite England's failure to close out victory in their past two games.

They have not lost in their last five visits to London since 2002, the last time they lost a Test on tour in Europe, and have won the last nine encounters between the two countries.

"England could have won the Australia game and again against South Africa, so they will be even more determined against us," said All Blacks coach Steve Hansen after his side had beaten Wales on Saturday.

"I think the management are doing a good job and growing the way they want to play, and they have introduced some new kids into it.

"I think we will have a huge battle on our hands this week. We will respect them as we always do and prepare the best way we can."

Players released back to their clubs: