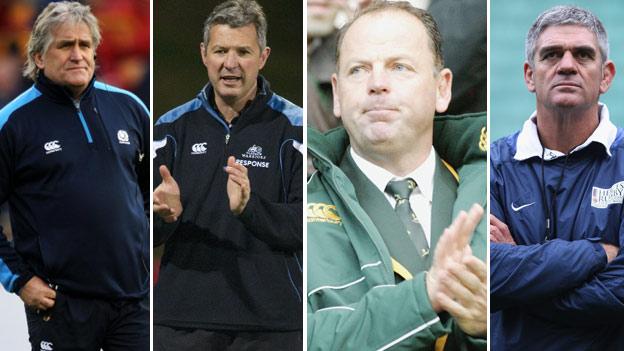 Chalmers and New Zealand-born Lineen played together in the Five Nations Grand Slam success of 1990.

"Sean has shown his loyalty to Scotland since moving over," Chalmers told BBC Scotland. "He'd be top of my list."

However, ex-winger Kenny Logan thinks a lack of international coaching experience may count against Lineen.

But Melrose coach Chalmers, who won 60 caps, wants to see someone with a Scottish connection at the helm.

And Lineen is currently coaching the Scotland Under-20s in tandem with a head of player acquisition role after six years in charge of Glasgow Warriors.

"Sean knows the game and he's been totally committed to Scotland," explained Chalmers.

Scotland have slipped to 12th in the world rankings ahead of the 2015 World Cup draw on 3 December and were knocked out at the group stage for the first time in last year's tournament in New Zealand.

Logan, who won 70 caps between 1992 and 2003, said it was crucial to make the right appointment to take the national side forward.

"We shouldn't panic because we're three years away from the World Cup," he said.

"I would go for Scott Johnson as interim coach to get us through the Six Nations and then go for a big name.

"Sean's not had any international experience and that's a risk."

Former Scotland coach Jim Telfer does not want to see Johnson given the top job, even though the Australian has international coaching experience with his homeland, Wales and the United States.

"I wouldn't appoint Scott Johnson," the 72-year-old told BBC Scotland. "He has had too many jobs as assistant and he's moved around a bit.

"He has still to prove himself as far as I'm concerned."

Telfer then suggested George Graham as a possible outside candidate.

The Gala head coach spent three years working with Scotland's forwards until May 2008 and managed Italian side Petrarca for a season.

"George Graham is a very honest coach and he has improved Gala enormously," said Telfer.

"I would prefer to get a permanent head coach in as quickly as possible in view of the fact that we have a relatively easy Six Nations, with three home games against the weakest teams [Italy, Ireland and Wales]."

Robinson ended his three-and-a-half reign after Saturday's defeat by Tonga, his 10th loss in 13 Tests.

In his resignation statement, the Englishman said: "I am very disappointed by our recent results but I have belief in the players to develop into a winning team.

"I believe I have left the team in a better position than when I took over and have great confidence in the players and the coaches for the future."

Scottish Rugby said it would begin their search for Robinson's replacement immediately.

Chief executive Mark Dodson issued a statement saying "a change in head coach is required to take the team forward and build towards the Rugby World Cup in 2015".