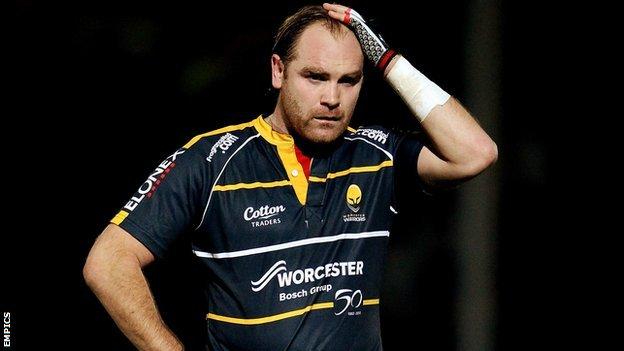 Andy Goode says Worcester Warriors must turn around their results away from Sixways if they are to challenge for anything this season.

The former England stand-off scored all of his side's points in Friday night's 12-3 win over Saracens to extend their unbeaten home run to six matches.

But Richard Hill's team have lost all four of their away Premiership matches.

"We need to back this up with a performance at Harlequins next week," Goode told BBC Hereford & Worcester.

"We're pretty good at winning at Sixways on Friday nights, the fans are outstanding and we really get up for it.

"What we're not so good at is backing the victories up away from home.

"Harlequins are obviously going to be missing a few, but they'll still be a good team, with people like Nick Easter in the squad.

"And we need to get better on the road to keep us looking up the table and pushing for those Heineken Cup spots."

Goode outkicked opposite number Nils Mordt, landing three of five penalties, as well as one of three attempts at a drop goal, a scruffy first-half effort that just squirmed its way over the bar.

"It was probably the ugliest one I've ever hit," Goode added. "Ugly, but effective and they all count."

"There were two inches of water on the pitch on Thursday night," pointed out Goode. "The groundsman did a great job to get the game on.

"It was pretty wet, it was greasy underfoot and the ball was like a bar of soap.

"There was a lot of kick and chase, but that's what it took to win the game.

"It was the same for both sides but we managed our game just a bit better than they did.

"We forced errors, which told in the end and it was a great effort from the boys.

"It was a question of posing our physicality across the board. Our forwards were outstanding in defence and Josh Matavesi, Joe Carlisle and Alex Grove all made important early tackles."