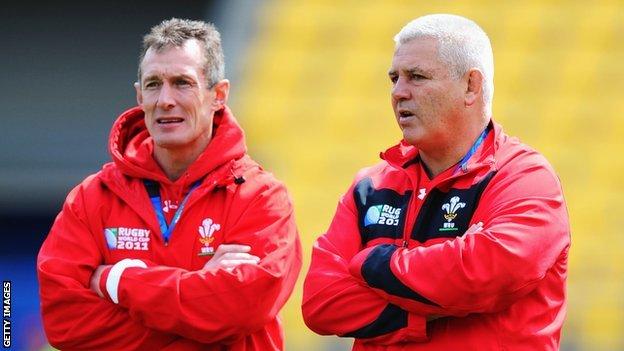 Rob Howley says Wales will not be worrying about the world rankings when they play Australia on Saturday.

Wales will drop out of the top eight in the International Rugby Board rankings if they lose, and be in the third tier of seeds for the 2015 World Cup draw.

But assistant coach Howley says the team are keeping their eye on the ball.

"I think we're concentrating on... our performance and winning on the weekend rather than thinking about the IRB rankings," he said.

The seed bands for the World Cup will be confirmed after this weekend's matches ahead of the draw next Monday, 3 December.

Wales are currently ranked seventh after their 33-10 defeat by New Zealand on Saturday.

The top 12 countries in world rugby will be split into three groups of four, with sides from the same band avoiding each other in the draw.

In the 2011 World Cup, all eight quarter-finalists came from the top two seeding bands.

Howley admits Wales would prefer to be among the second seeds, but that the team are not concentrating on that issue.

"It's obviously in our thought process," he said. "But having said that in the last World Cup in 2011 [when Wales reached the semi-finals] we were in the pool of death with Samoa and South Africa.

"I think when you look at the seedings and the weightings of the top 12 that you know whether you're fifth to eighth or ninth-plus then you are going to have very good sides.

"You know we've said coming in that we want to be in that fifth to eighth slot and that hasn't changed," said Howley.

Centre Jonathan Davies admits the ranking worries might put a little extra pressure on the players.

"Maybe a bit, yes, but this team performs well when there's pressure put on it," the Scarlets player said.

"So when the pressure is put on us we rise to those challenges normally, so I think that's what's going to be needed this weekend."