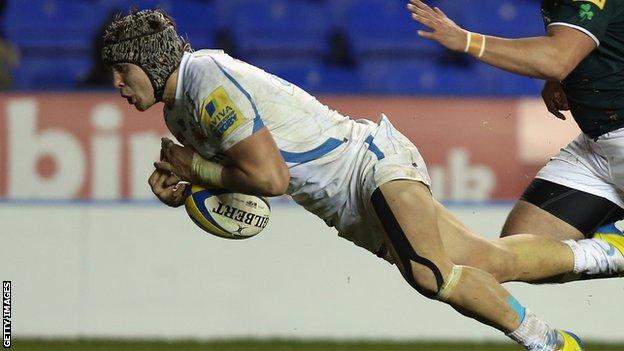 The 19-year-old started on the wing, despite his preferred position being full-back, and had a late try attempt ruled out for a knock-on.

"He can be very happy with his first 80 minutes," Baxter told BBC Radio Devon.

"For a young guy to come in and play 80 minutes and still have the involvement that he did at the end was fantastic."

England Under-20 international Nowell has spent time at and on dual-registration deals, but was earlier this month.

"Aly (Hepher, Exeter's backs coach) and Ricky (Pellow, Exeter's skills coach) are big fans of his and we sat in the office and they said it was his time," Baxter said.

"They were right to say 'come on, let's let this young lad step up' because it paid off."

And Baxter defended the decision to play the full-back on the wing for his first taste of top-flight action.

"It was important for us to give him the best opportunity to perform well," said Baxter.

"Playing at full-back today was tough, playing on the wing eased that pressure on him.

"He's really good at either position and down the line he's a guy we hope will be here for six, seven or eight years.

"We've got to keep working hard with him, he's had his first taste now and we've got to see when his next will come."