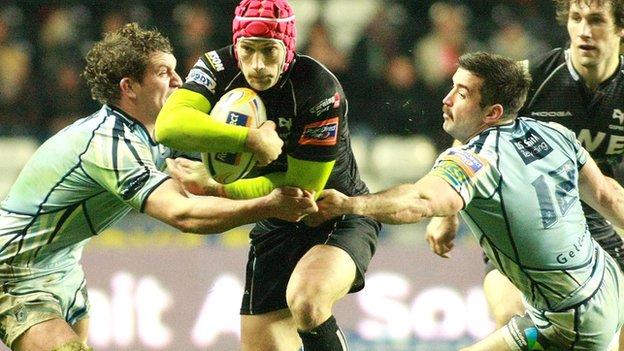 Ospreys moved up to fourth in the Pro12 after a convincing win over Cardiff Blues at the Liberty Stadium.

The home side were ahead 16-6 at the interval through James King's early try and the boot of Matthew Morgan.

Most of the opening 10 minutes of the game was played in the Blues half and it was the Ospreys who secured the first points of the game through the boot of Morgan.

Within two minutes the Ospreys had extended their lead with lock King finishing off a well-worked move involving Joe Bearman and Kahn Fotuali'i to go over in the corner.

Morgan added the conversion and the Ospreys were in full control, although the fly-half put his second penalty attempt wide of the post.

However, Morgan was to make no mistake moments later with a penalty which made it 13-0 in the home side's favour.

The Blues had barely troubled the Ospreys but following their first real attack of the game Sweeney secured their first points with a penalty.

The Ospreys were making the most of their opportunities and the lively Morgan added a third penalty to restore the home side's 13-point lead.

Sweeney's second successful penalty of the evening kept the visitors in touch, despite the Ospreys dominance, and they trailed by ten points at the interval.

Two minutes into the second half the Ospreys scored a second try when Fussell went over following up a neatly weighted kick ahead by wing Ross Jones, converted by Morgan.

Patchell added three points for the visitors with a simple penalty in front of the posts before the home side's Sam Lewis was shown a yellow card for a professional foul.

The Blues played out the final five minutes with 14 men following the sin-binning of captain Josh Navidi.

Although Lloyd Williams' tackle prevented Eli Walker from crossing the try line the Ospreys sealed their victory in the closing minutes,

Replacement flanker Allen cemented the home side's victory, breaking through a weak tackle for a third try, which was converted by Morgan.