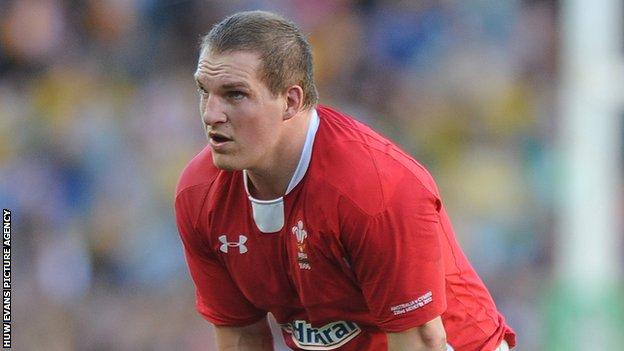 Prop Gethin Jenkins admits being dropped twice by Wales has given him a wake-up call this autumn.

Jenkins, who signed for Toulon this season, started against Argentina but was consigned to the replacements bench against Samoa and New Zealand.

With loose-head Paul James returning to his club Bath, Jenkins is expected to start against Australia.

"It's been a bit of a kick up the backside for me I suppose the last couple of weeks," admitted Jenkins.

"I want to go out in that team on Saturday and prove that I'm worthy of that loose-head position.

"Paul got the nod last week. I was obviously very disappointed. I backed the decision, backed Paul and came off the bench.

"It's hard to switch yourself on when you are on the bench. When you start it's a pretty different mentality.

"It will be different, but I'm used to starting for Wales normally," insisted 93-cap Jenkins.

If Jenkins plays on Saturday he will go equal fourth with Colin Charvis in Wales' all-time cap list.

Jenkins, a British and Irish Lion on the tours to New Zealand in 2005 and South Arica in 2009, will have to wait until Thursday to confirm his place in the starting line-up after coach Warren Gatland delayed the team announcement by 48 hours to assess a string of injuries.

Despite the game being outside the International Rugby Board international window, Jenkins, Luke Charteris (Perpignan) and Mike Phillips (Bayonne) have all been released by their respective French clubs.

But James (Bath) and James Hook (Perpignan) have returned to France.

Tight-head prop Aaron Jarvis, who has been ruled out for the season with knee damage, and lock Bradley Davies, concussed after being hit off the ball in the 33-10 defeat by New Zealand, are both out.

Doubts remain over five other players.

Jamie Roberts and Ryan Jones were forced off on Saturday, while George North, Dan Biggar and Ian Evans are also hoping to recover from injuries.

The good news for Wales was that lock Evans took part in training on Tuesday.

But centre Roberts (hip) will not training in the early part of this week and back-row Jones (head) has stitches and will take a limited part in training until the end of the week.

Fly-half Biggar (shoulder) was due to resume some rugby training on Monday afternoon after being forced off in the defeat by Samoa. The Welsh Rugby Union says he is not yet ready to take contact but is hoping to be in contention later in the week.

Scarlets wing North (hip) is continuing his rehabilitation and remains in contention to return after being forced to withdraw from the side to face the All Blacks.