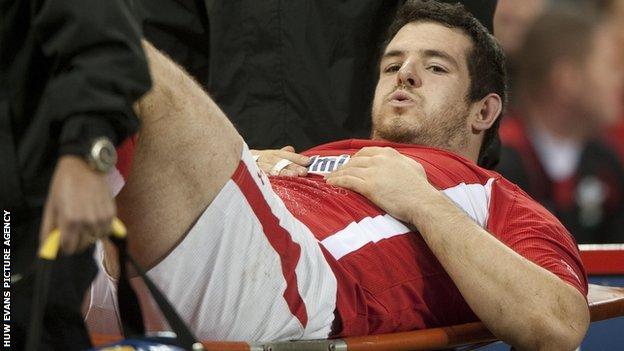 Wales and Ospreys prop Aaron Jarvis will not play again this season after suffering a serious knee injury.

The 26-year-old tight-head suffered "significant" ligament damage in the first minute of Wales' 33-10 defeat by New Zealand in Cardiff on Saturday.

He will require surgery and becomes the third Ospreys tight-head prop to suffer serious injury in the space of a month.

Adam Jones (knee) and Joe Rees (neck) are also out and will miss the Heineken Cup double-header with Toulouse.

With Jones and Craig Mitchell sidelined, Exeter-born Jarvis, who qualifies for Wales through a Welsh grandmother, made his international debut in the autumn series opener against Argentina.

He retained his place in the side for the following two games, but he left the field on a stretcher against New Zealand after falling awkwardly at a ruck in the first minute.

Ospreys physio Chris Towers said: "We are currently in discussions with specialists to establish the best surgical option and timing of the surgery to ensure the best outcome."

Cardiff Blues prop Scott Andrews, 23, replaced Jarvis against the All Blacks and is likely to start against Australia on Saturday to win his fourth cap.

Ospreys will now look to their fourth-choice tight-head for the crucial Heineken Cup matches against Toulouse on 8 and 15 December.

Andrew Hore, the Ospreys chief operations officer, said the spate of injuries to the region's players proves the need for a different structure to the season.

"We have now lost three senior tight-heads in the space of just a month, which is particularly bad news for us, coming at a time when our resources have already been badly hit through injury and just before our biggest games of the season so far, the back-to-back Heineken Cup matches against Toulouse," he said.

"The current season structure sees games in the top European competition go straight into a month of test rugby, and then back into Europe and the Welsh derbies, for a crucial month long period in December and January.

"Looking at the players we have lost through injury in recent weeks it's clear that the structure isn't working, for the national body nor the regional partners, and it needs to be looked at globally."