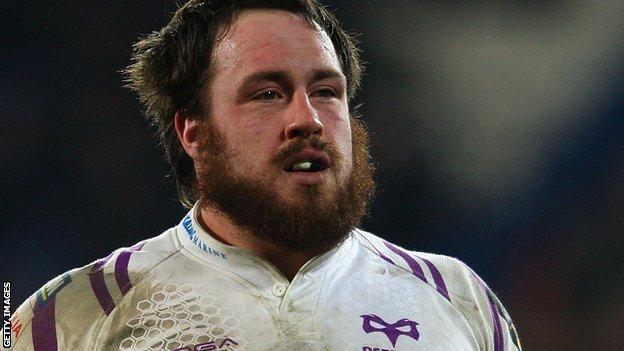 Cai Griffiths has returned to Ospreys until the end of the season on a loan deal from London Irish.

The prop, who can play either side of the scrum, has been recruited by the Welsh region to help alleviate a crippling injury list.

Adam Jones and Aaron Jarvis are out with knee injuries, while Joe Rees is recovering from neck surgery.

Ospreys are hoping to sign another experienced tight-head prop to play in the Heineken Cup games in December.

The Welsh region, who are second in their pool, face leaders Toulouse away on 8 December and at home seven days later.

Jones should be available for the final two pool games against Leicester on 12 January and Treviso a week later.

Griffiths is ineligible for the European games having already players for Irish in the Amlin Challenge Cup earlier this season, one of a total of six appearances for the Aviva Premiership.

Griffiths, who can also operate at loose-head, made over 100 appearances for the Welsh region between 2003 and 2012.

"We need to get experience in and Cai fits the build," said Ospreys coach Steve Tandy. "He was an Ospreys for years and years.

"He trained on Wednesday and slotted back into place."