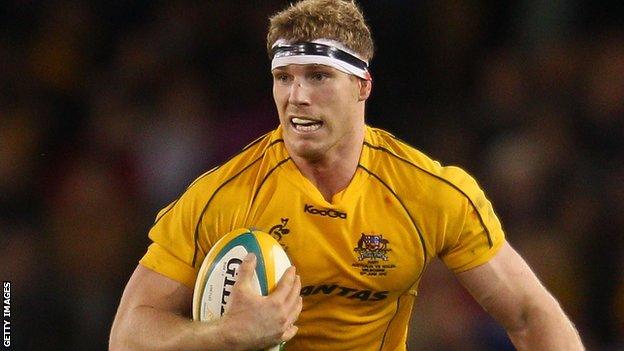 Australia flanker David Pocock is poised for a return from injury against Wales in the final autumn international at the Millennium Stadium.

A calf muscle strain stopped Pocock from facing France and England earlier in November, having been sidelined since August after knee surgery.

Michael Hooper has been outstanding in his absence and could retain his place.

"He [Pocock] is quite a bit of a talisman for them," said Wales forwards coach Robin McBryde.

"To have him back in the team is going to raise you again.

"He is akin to [New Zealand captain] Richie McCaw - the influence he has on the All Blacks with regards his leadership. So he is going to play a vital role for Australia on the weekend.

"Australia are a devastating side when they play off turnover ball and that is a big challenge for Wales. If David Pocock plays, he is outstanding in everything he does in his decision-making around the breakdown. He gets so low over the ball that he is almost immovable.

"They base a lot of their game on turnovers, which allows their dangerous backs to run in broken play. Pocock brings them that but if he doesn't play, they have another guy in Michael Hooper who is almost as good."

Australia, like Wales, are due to reveal their starting line-up on Thursday, having welcomed Pocock back into full training this week.

Timani caught Lo Cicero with his forearm during a first-half scuffle in the Wallabies' 22-19 win last Saturday. He connected with Azzurri hooker Leonardo Ghiraldini with the same blow.

International Rugby Board's judicial officer David Martin deemed the offence to be at the lower end of the scale and banned Timani until midnight on 2 December.

Australia are already without suspended lock Rob Simmons for the Cardiff clash but Kane Douglas has rejoined the squad after being sidelined for the last two weeks with a knee injury.

So far on tour, Australia have lost to France but have beaten England and Italy.

Pocock captained Australia as they whitewashed Wales 3-0 in June and he played in the Wallabies' win over Wales in the Rugby World Cup bronze medal play-off in October 2011.

Former Wales captain Jonathan Davies believes Warren Gatland's side, who have lost their previous three matches against Argentina, Samoa and New Zealand, should start with captain Sam Warburton and Justin Tipuric in the back-row to counter Australia's mobile back-row.

"Wales haven't coped well in the tackle area and breakdown in this autumn series. That has been our Achilles heel," said Davies.

"Maybe they need to look at the balance of the back-row because turnovers are key against Australia. Why not start with the pair [Warburton and Tipuric] of them?"