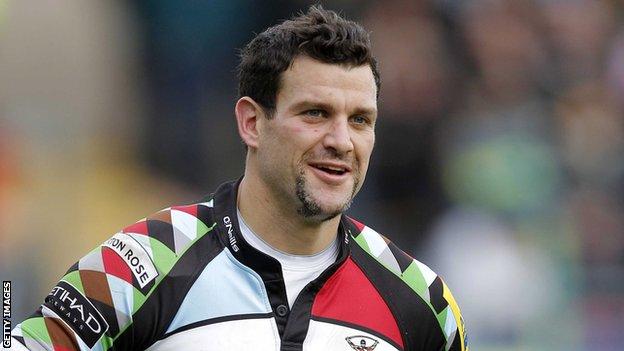 Harlequins scrum-half Karl Dickson has backed the Premiership leaders to correct the mistakes made against Bath last weekend when they face Worcester.

Quins have lost three games this term and entertain the Warriors on Friday.

Dickson told BBC London 94.9: "There is a little bit of frustration and disappointment but we found last year that you bounce back from games.

"We learned what we did wrong and where we need to alter our game. Hopefully it will show dividends this weekend."

The 30-year-old added: "Teams are there wanting to beat us more than ever because we are champions.

"We're not going to go through the whole season undefeated. We are in a great position at the moment, even though it is very close at the top of the Premiership."

Evening kick-offs are tough as during the day you are waiting around for the game. You've really got to get yourself going after sitting around most of the day

Dickson is wary that Harlequins will have to be prepared for a physical encounter when they welcome Worcester to the Twickenham Stoop.

"Worcester are a tough team who are coached really well," he continued.

"They are a big, direct and strong side and we need to take that away from them. We feel we have a good game-plan to soften their big runners.

"Discipline is going to be massive as we can't give them an opportunity to get in the game.

"If we can put pressure on them the floodgates may open later on when their big boys are tired."

Meanwhile Dickson has given his backing to club colleague and England captain Chris Robshaw.

The flanker has received criticism following the international against South Africa last weekend when he opted to kick for goal with England trailing 16-12 with a couple of minutes left.

"What is probably the most disappointing thing is that Robbo has made a decision and people haven't backed him up," Dickson said.

"Here at Quins he makes a decision and no-one argues. We just get on with it.

"It is a decision he makes and he has obviously got his reasoning for it.

"We have an ethos at Quins that you stick together and get on with the job in hand."