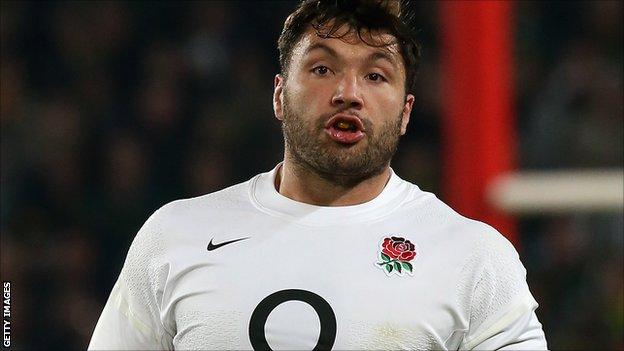 London Irish director of rugby Brian Smith has admitted he is unsure if prop Alex Corbisiero will still be at the club next season.

Newspaper reports on Tuesday suggested the England international was expected to join Northampton in the summer.

Smith said the 24-year-old is stalling on a new deal but hoped they could still keep him calling reports linking him to the Saints as "speculation".

If Northampton, the player and agent have conducted themselves improperly in any way and we have evidence of that then we would do whatever we have to do protect ourselves

Corbisiero is expected to be part of the England squad that take on World champions New Zealand at Twickenham this weekend.

Smith says the club are keen to keep the prop, who came through the club's academy, while also warning Northampton to conduct any approach for the player in the correct way.

"He is one of our senior players, he is part of the leadership group and part of the London Irish project," said Smith.

"He plays for England so of course we would like him to stay, so we are trying to work through that with his agent.

"It is just speculation, all I can say is we want him to stay, the club wants him to stay, so the ball is in his court. "

Smith added: "If Northampton, the player and agent have conducted themselves improperly in any way and we have evidence of that then we would do whatever we have to do protect ourselves.

"Players of any clubs or their agents are not allowed to speak to other teams until January. The reason behind that is so players could crack on and get the body of the season out of the way before being distracted.

"If everyone buys into the system it is a good system but if agents and players want to cheat that system then they need to be held accountable.

"But I would like to stress it is just speculation at this stage. We have left Alex alone as he has a big Test match this weekend, but after he gets back then we will be asking for an explanation."