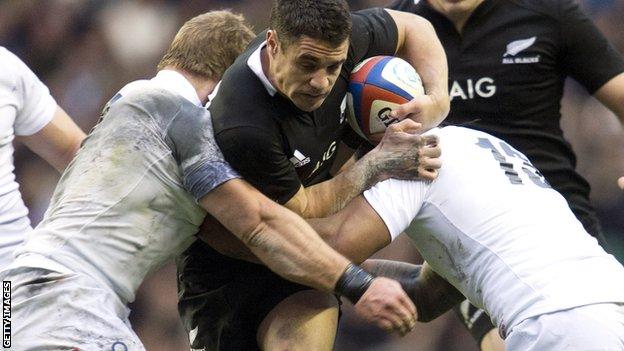 New Zealand fly-half Dan Carter has been named International Rugby Board's player of the year for a second time.

The All Blacks, who were unbeaten in 20 Tests before Saturday's loss to England, were named team of the year.

IRB player of the year

New Zealand's Steve Hansen was also named the coach of the year award.

England's Owen Farrell was on the four-man shortlist for the player of the year award along with New Zealand's three-time winner Richie McCaw and France's Frederic Michalak.

Carter, 30, has 94 caps for New Zealand but missed the All Blacks' triumphant World Cup victory in 2011 with a serious groin injury.

IRB Chairman Bernard Lapasset said: "Dan Carter has bounced back from the disappointment of missing the majority of the World Cup through injury to show what a truly magnificent player he is and a wonderful ambassador for our sport.

"New Zealand have again been the stand out team of the year with their 20-match unbeaten run and thoroughly deserve the IRB team of the year award along with Steve Hansen as IRB coach of the year for his feats in keeping a rugby World Cup winning-team winning."

The winner was announced at the Rugby World Cup 2015 pool allocation draw in London.