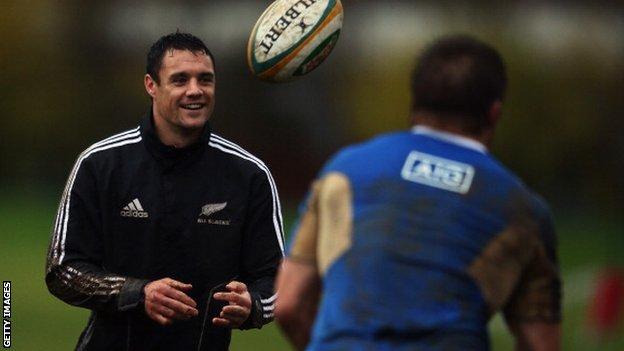 New Zealand's preparations for Saturday's Test against England have been disrupted because of a sickness bug which has swept through the squad.

Head coach Steve Hansen revealed all but two members of his squad have suffered with diarrhoea and vomiting.

But Hansen said it would not affect selection for the match and confirmed Dan Carter will start at outside-half after recovering from an ankle injury.

The majority of the New Zealand team succumbed to severe food poisoning 48 hours before the 1995 World Cup final. The All Blacks went on to lose the final 15-12 to South Africa.

The New Zealander admitted it had been a difficult week but did not anticipate anyone would require a fitness test.

All Blacks number eight Kieran Read said the players had a "guided tour of the bathrooms" on Wednesday before adding that he now felt "a lot better".

"Hopefully it's a 24 hour thing. It's just something you have to handle and we'll be alright for Saturday," said Read.

Hansen has made three changes to the New Zealand team hoping to defeat England and extend their unbeaten run to 21 games.

Carter returns to fly-half after missing the 33-10 victory over Wales on Saturday because of injury, while hooker Keven Mealamu replaces the suspended Andrew Hore and Brodie Retallick is picked ahead of Luke Romano in the second row.

Hansen also admitted he was embarrassed by Hore's behaviour after the player was banned for five weeks for striking Wales lock Bradley Davies, and could understand why some believed the hooker's suspension was too lenient.

Hore's ban will run until Sunday, 24 February, which means he will miss Saturday's Test and three Super Rugby pre-season matches for the Highlanders.

"He admits himself the intent was to do something else but he got it drastically wrong," said Hansen of the strike which left Davies needing to be taken to hospital with concussion.

"It's not us that set the rules, it's the IRB [International Rugby Board]. Do we agree with it? Probably not but it's there."