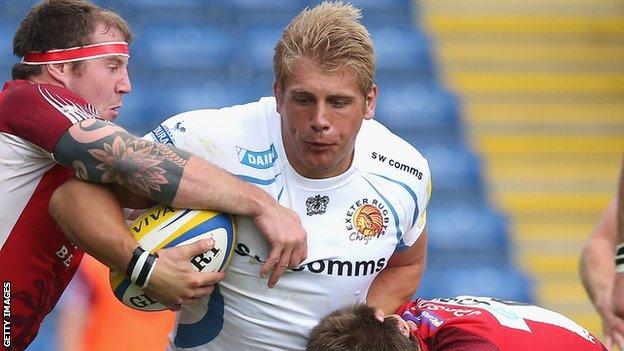 Exeter prop Carl Rimmer is finding it hard to believe how well his first season in the Premiership has gone.

The 24-year-old as a loose-head and has after eight starts, mainly at tight-head.

"It's been brilliant, I couldn't have wished for anything more," he said.

"I've definitely played more back-to-back games now than at any time in my career, and it's come at the biggest club I've ever played at."

Rimmer made his debut as a replacement in the loss at London Welsh in September and has started every Premiership game since, as well as getting the nod in both of Exeter's Heineken Cup matches.

The achievement is even more impressive as most of those games have seen the loose-head start on the wrong side of the scrum after injuries to Hoani Tui and Craig Mitchell.

"I was happy to stick my name in the hat and say 'I can do a job there' and see what happens," he told BBC South West Sport.

"It's gone a lot better than I'd have hoped and it's seemed to be all right.

"It was always a long-term goal to move across the scrum to tight-head. I've been given the chance in the deep-end and I hope it's gone alright."

Rimmer's form has led to him impressing those around the game as he has held his own against some of the best front-row players in the world.

"One of the biggest things that has surprised me since being here and playing this level of rugby is that they are just people," he said.

"They are a little big bigger, a little bit stronger and a little bit more up on the game, but they are still people, they're not super-humans.

"If you get on board and up to speed as quick as you can, you're laughing as well."