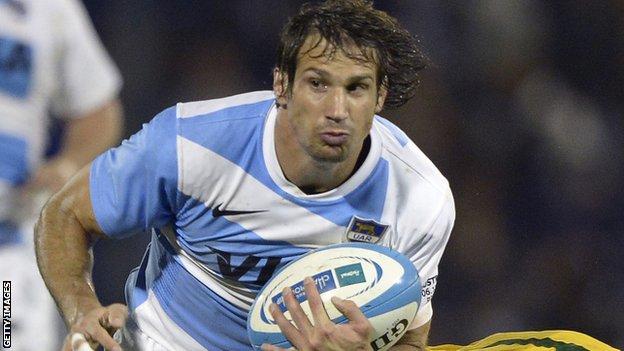 Exeter's Argentina international Gonzalo Camacho is not surprised that his country beat Wales after competing in their first Rugby Championship.

The Pumas played South Africa, New Zealand and Australia this summer and finished fourth in the tournament.

Winger Camacho, 28, scored a try in the

"I wasn't surprised, it was something that had to come after our great matches in the rugby Championship," he told BBC South West Sport.

The Pumas have played nine test matches since the summer and as well the win over over Wales drew with South Africa and suffered two narrow defeats against Australia.

Camacho, who also played in the recent "It was very good to have that first win and put the team where it deserves to be.

"It was a shame that we lost against France and Ireland, there was a bit of a loss of concentration and we were there in the game against Ireland, but they played a perfect match and we couldn't stop them."

And he says the decision to put Argentina in a tournament with the old Tri Nations countries is already improving the standard of Argentina's performances.

"It helps because it gives you confidence playing against the best teams in the world and afterwards going here on tour in Europe," he added.

"It's very good to test yourself between the northern and southern hemisphere as well.

"You have to try everything and that's the way you go and look for perfection in a team.

"We have to keep on working, we know our errors, we know what we cannot do and we're going to keep on looking for things to improve with the Argentina team."