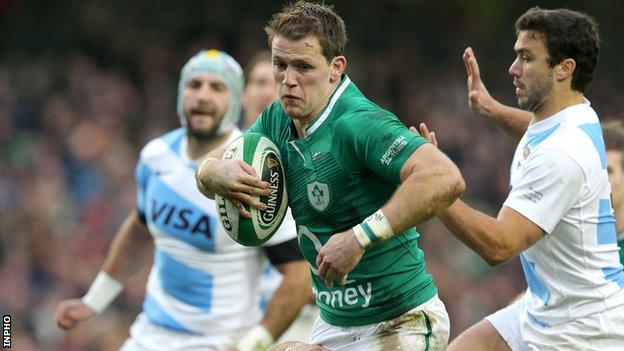 Craig Gilroy's superb debut for Ireland has put the young wing in contention for a place in the Lions squad for next year's tour of Australia.

The Ulster player's try-scoring display in the win over Argentina caught the eye of Lions head coach Warren Gatland.

"He was outstanding, so he has put himself into contention - some guy has put his hand up and made you sit up and take notice," said Gatland.

"The captaincy is a tough one at the minute," added Gatland.

"Ideally it's someone who is hopefully guaranteed selection in terms of the Test side but then you look at the depth in certain positions and there's no guarantee of that.

"The other thing too is that you could, potentially, pick an experienced player who might be tour captain but there's a chance he might not be picked for the Tests.

"Someone like Heaslip, who has captained Ireland in the last couple of games, has put himself in the frame."

Gilroy, 21, ran in a brilliant try and helped create three more as he starred for Ireland in the 46-24 win over the the Pumas.

The Lions are aiming to secure a first series victory since the 2-1 win against South Africa in 1997.