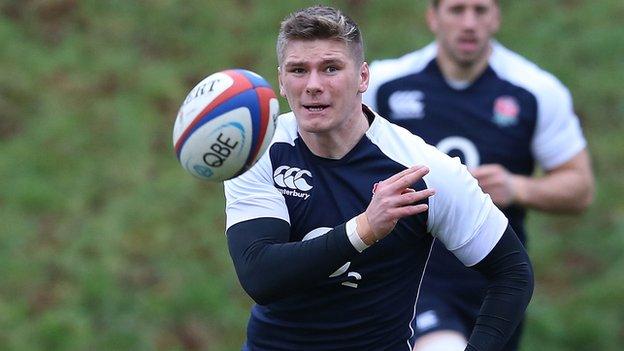 Owen Farrell will start at fly-half in place of the injured Toby Flood as England make one change for Saturday's final autumn Test, against New Zealand.

Flood's toe injury means 21-year-old Farrell, who is on a four-man shortlist for the International Rugby Board Player of the Year award, starts for the first time since the summer tour.

There are two changes on the bench.

Fly-half Freddie Burns gets his first call-up and lock Courtney Lawes is back for the first time since February.

"I'm massively excited," Farrell told BBC Sport. "What better way to prove yourself than to play against the best team in the world? Not just for me but for the team as well."

Farrell has to share the fly-half duties for Saracens with Charlie Hodgson, who has retired from international duty, but England insisted the youngster's selection against the All Blacks was not a gamble.

"I don't think his form dropped off as many suggested at the end of last season - he had had a long, hard season.

"He had a slow start to his season with a shoulder injury but in the last four weeks he has been outstanding in training."

Farrell is looking forward to the challenge of facing up to New Zealand fly-half Dan Carter, who is also on the IRB's Player of the Year shortlist.

"Dan Carter is a world-class player and one I've wanted to play against for a long time," Farrell said.

"But I think any team is beatable. No one is invincible. We've just got to be on top of our game, and take our game to them - not wait for them to strike first.

"We can't let them get on top of us before we bite back. We've got to impose ourselves on them."

Northampton second row Lawes, who replaces Saracens lock Mouritz Botha, has been battling a series of injuries over the past year and the 23-year-old last played for England against Wales in the Six Nations.

He damaged his knee against Saracens on 27 October but was on the field for nearly an hour for Saints in their Premiership win over London Welsh last Saturday.

Gloucester's Burns, 22, has been in excellent form for the Cherry and Whites this season, earning plaudits for his attacking style and improved game management, and takes Farrell's place on the bench.

Prop Alex Corbisiero did not train on Tuesday but has shaken off a knee problem to be named in the side.

England go into the game against the world champion All Blacks on the back of two losses, with a disappointing 20-14 defeat by Australia followed up by a frustrating 16-15 loss to South Africa.

The All Blacks, unbeaten in 20 Tests since the start of their victorious World Cup campaign last September, anticipate a "huge battle" at Twickenham but have not lost in their last five visits to London.

Their previous defeat, in 2002, was the last time they lost a Test on tour in Europe, and the world champions have won the last nine encounters between the two countries.