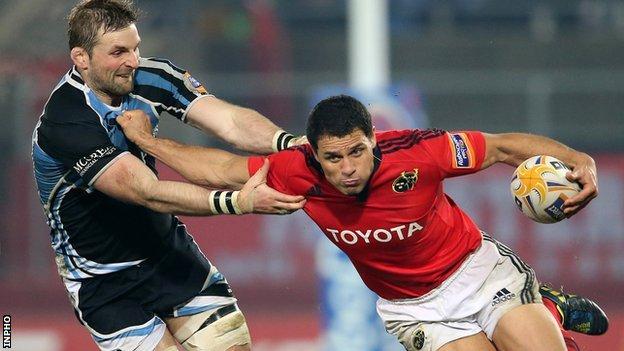 CJ Stander marked his home debut for Munster with two tries in the Pro12 bonus-point win over Glasgow Warriors.

The South African flanker lunged over from a close-in ruck for his first, but his second came from a dazzling diagonal run from the Munster 22.

Tommy O'Donnell sandwiched a try in between, leaving the province 24-3 ahead at the break with Duncan Weir's penalty the only score for the Scots.

Glasgow leaked a penalty try to the hosts with six minutes remaining.

Scotland international Weir, back after a two-month injury lay-off, got off to an inauspicious start at Thomond Park as his kick-off went straight into touch.

But Weir and half-back partner Henry Pyrgos duly settled in and the former kicked the Warriors ahead in the fourth minute, punishing Donncha O'Callaghan for not rolling away.

Munster replied soon after, using quick lineout ball to spring the strong-running O'Donnell through a gap.

He was brought down short of the line, but Stander dived over the top of the ruck to get the try he narrowly missed out last week against the Scarlets.

Ronan O'Gara's conversion was followed by a solid respond from the Warriors, with DHT Van der Merwe going close to scoring in the left corner and Weir missing a drop-goal attempt.

Mistakes from Munster went unpunished as the visitors struggled to add to Weir's opening kick, and it was Rob Penney's men who finished the first half strongly.

The returning James Coughlan passed for O'Donnell to fend off two would-be tacklers and sprint in under the posts for a smashing solo try, converted by O'Gara.

O'Gara added a penalty awarded against Mike Cusack for obstruction, before man of the match Stander turned defence into attack on a memorable charge towards the right corner.

The conversion from wide out was no problem to O'Gara but, as the pace and intensity slackened off in the second period, Munster left it late to claim their bonus point.

Glasgow danger man Van der Merwe was denied by a Simon Zebo challenge in the corner for the second time.