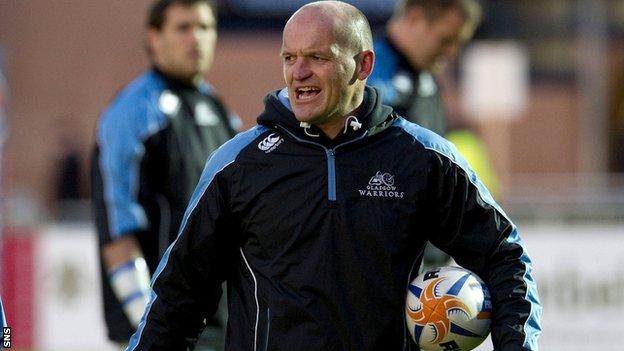 Gregor Townsend does not want to be considered for the vacant post of Scotland head coach.

But 39-year-old Townsend has only just started in his first head coaching role at Glasgow Warriors.

"My focus is firmly on Glasgow Warriors," he told BBC Scotland. "I know I have a lot of work to do to improve as a coach."

Townsend was appointed Scotland attack coach in 2009 when Frank Hadden was head coach and continued in the role under Robinson until this summer, when he took over from Sean Lineen at the Warriors.

"I'm enjoying this opportunity and I'll give it as much as I can to make the team successful," added the former British and Irish Lion.

"I've got a lot of work to do. I've been pleased with a lot of aspects of our season so far, but there is a lot if improvement to come from this group."

Townsend's place in the Scotland set-up went to Scott Johnson, who worked on the successful summer tour with wins over Australia, Fiji and Samoa.

But Sunday's loss to Tonga at Pittodrie was the final straw for Robinson following Murrayfield defeats by New Zealand and South Africa.

"I spoke to Andy on Sunday and he is comfortable with his decision and keen to get back into coaching," revealed Townsend, who won 82 caps for Scotland.

"I worked with him for three years and learned so much from him.

"He's a fantastic coach and I know he put everything into the job with Scotland.

"It's disappointing that we were not able to kick on from the summer tour, but we are not far away.

"We have some very good rugby players, but we have not been able to produce an 80-minute performance this autumn.

"We've been close to getting it right for a while.

"I was involved at the World Cup and we had two defeats in the last two or three minutes of games, against Argentina and England.

"We've been competitive, but we've not had the run of results the team is capable of.

"That's international rugby - you don't get many opportunities during the year and confidence and momentum are so valuable.

"Look at Wales. On the back of a couple of good wins, they won a Grand Slam and now they've lost six in a row.

"It can be a fine line between success and failure.

"Whoever takes over will inherit a hard-working bunch of players that are desperate for success."