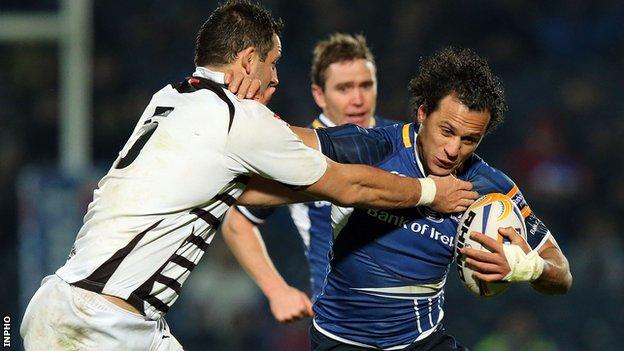 Man-of-the-match McFadden got his scores after the break with Cian Healy also crossing for Leinster.

The Italians threatened through wingers Leonardo Sarto and Sinoti Sinoti, and got a deserved try in the 48th minute try by scrum-half Tito Tebaldi.

Sexton and Sean O'Brien were withdrawn by Leinster at half-time with two crunch European clashes with Clermont Auvergne looming.

Zebre had an impressive opening quarter but Leinster took the lead on 25 minutes as Sexton split the posts when the visitors were penalised for not releasing.

McFadden embarked on a thrilling run straight from the restart, breaking onto his own chip at pace and Zebre's defence was unable to hold out.

Sexton drove play to the right where he linked with O'Brien, who passed for winger Conway to dot down in the corner. Sexton converted with aplomb for a 10-0 advantage.

A succession of penalties led to Italy lock Quintin Geldenhuys being sin-binned in the 32nd minute and Leinster added a timely second try, Sexton's neat footwork seeing him slice through for a try which he converted himself.

A bout of strong carrying led to Tebaldi breaking off a ruck to score his converted try.

The margin was down to 10 points, but Leinster quickly extinguished any hopes Christian Gajan's men had of a shock Dublin win.

Winger McFadden, taking over the kicking duties from Sexton, settled the hosts down again with a well-struck penalty, before D'Arcy drew in a couple of defenders to pass for McFadden to force his way through.

The province's bonus point score arrived with 11 minutes remaining, as lively replacement Healy bounced off Andrea de Marchi's tackle to get in at the left corner.

Leinster pressed for a fifth and final try and it duly arrived, Ian Madigan punting across to McFadden who barged through two loose tackles to complete his 15-point tally.