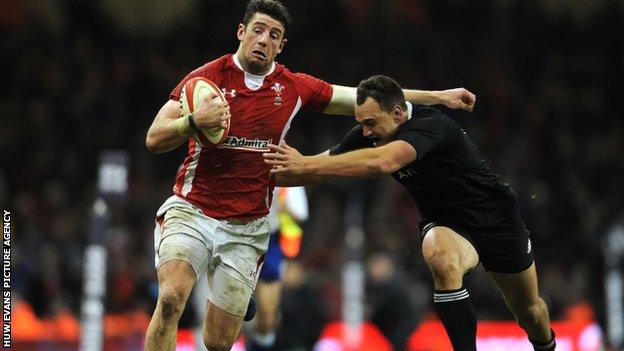 Wales are still looking for their first victory of their autumn Test series, having lost to Argentina, Samoa and New Zealand.

Warren Gatland's side's last chance to record a win is against the Wallabies in their fourth and final game at the Millennium Stadium.

"This is a big game for us and we know we can beat Australia," said Cuthbert.

Wales have lost their last six games, their worst record since 2003, and need a victory to avoid an autumn whitewash at the Millennium Stadium.

Gatland's side will drop out of the top eight in the International Rugby Board rankings if they lose, and be in the third tier of seeds for the 2015 World Cup draw.

The 2012 Grand Slam champions and 2011 World Cup semi-finalists suffered a shock defeat by Argentina followed by a 26-19 loss to Samoa, and were beaten 33-10 by New Zealand last Saturday.

While the lacklustre performances against the Pumas and Samoans were widely criticised, Wales did salvage some pride with their second-half performance against the All Blacks.

Cuthbert, who has scored five tries in 12 Tests, believes Wales can build on their second half display against New Zealand for their final clash with Australia.

"We showed how we can play in that second half against New Zealand," said Cuthbert.

"It has been frustrating that we haven't been playing that kind of rugby in all our other games.

"This is a big game for us and we know we can beat Australia and we got so close to that in the summer.

"We are all looking forward to it and hopefully we can get the win."

The 22-year-old has been made a permanent fixture in the Wales side since the retirement of record try-scorer Shane Williams after the 2011 World Cup in New Zealand.

He made his debut against Australia at the Millennium Stadium in December 2011, and played every game in Wales' 3-0 Test series defeat down under in the summer.

Cuthbert will make his fifth appearance in 12 Tests against the Wallabies in less than a year when he lines up on Saturday and admits Wales need a win.

"I don't think Australia have any weaknesses and they are all world-class players," said Cuthbert.

"We just have to have a big collective effort, play our game and have discipline, which cost us in the summer, and if we do that, we can get the win."