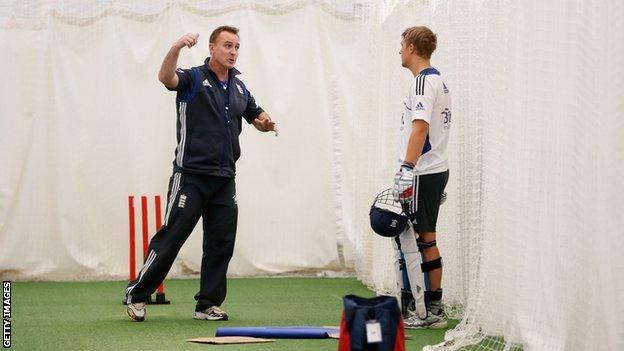 Two Tests in, the dominant plotline of England's series in India could not be more clear.

With due deference to the weary seam toilers, this is a contest defined almost entirely by the two team's relative successes in playing spin. In Ahmedabad it was England's batsmen sent spiralling, losing seven wickets for 71 in their pivotal first innings; in Mumbai, India lost all but one of their 20 wickets to Monty Panesar and Graeme Swann.

Playing top-flight spin on turning pitches, as those struggling batsmen can testify, remains one of the great challenges in the game. So how to succeed where so many have failed?

Of all England's batsmen of the last 20 years, Graham Thorpe had a better record against the turning ball than any other. In the winter of 2001-2, when England won series in both Pakistan and Sri Lanka, he hit 553 runs at an average of 61.44, including two centuries; in Tests overall, his average on the subcontinent was identical to his record on more familiar surfaces.

Now ECB national lead batting coach, working with the England Performance Programme, Thorpe has responsibility for schooling the new generation of players. This is what he tells them.

Thorpe's key tutors in his own development were former Essex and England skipper Keith Fletcher, on his early 'A' tours, and then senior team coach Duncan Fletcher.

The second Fletcher expanded on the preferred theory of his namesake. The magic word? 'Press'.

"Think of that as a very powerful front-foot movement," explains Thorpe, "that allows you to move towards the pitch of the ball if it's full, or - if it's just short of a length, to get very deep in your crease by pushing back off your front foot and playing as late as you can."

This is less of a stride than a galvanising of your front leg.

"It's a movement that then goes again, that responds to the length and the flight of the ball," says Thorpe. "It's certainly not overcommitted. There is a difference between a press, which is a movement that leads to something else, and a plant - a big old heavy step with the front foot that leaves you stuck.

"You should have momentum going over your front leg, so that there is a little tension in your front thigh. That bend in the front leg allows you to push back quickly if the ball is short enough.

"The way it looks can vary between players. Graham Gooch used to be slightly more upright than me; I liked to crouch a little. But his front foot would have been doing something very similar to mine. He was effective off front and back foot, and he was also able to sweep."

That's the first part of the theory. Putting it into practice requires a second set of skills.

"It all sounds very easy, but in the heat of the battle people then have to make decisions," says Thorpe. "And that brings in game-plans, concentration, real clarity in your method and a balance of aggression.

"Some players naturally like to be more aggressive in their play. They will try to impose themselves. It's an individual choice.

"The longevity of your innings in Asia can come down to how many times you do that correctly. If you make one little technical mistake where you're half-cock, not far enough forward, not far enough back, and the spinner lands it at his optimum pace and gets turn, you've got four men round the bat and you get an inside edge and you're gone.

"You need real belief in your method. You can see that when players first go in. if they have their footwork and real belief, you can see a calmness about them."

The best players in the world are self-evidently capable against almost any attack. Jacques Kallis, for example, averages 63 on subcontinent pitches, Ricky Ponting 62, Hashim Amla 84.

Each of those players has a well-developed understanding of which shots might be open to them against spin, and when to play them.

"If they do play a big shot, you can clearly see the method in what they're trying to do, and the reasons behind it," says Thorpe.

"Pre-meditated isn't good, because it reduces you to one shot. What I used to say to myself was, if the ball goes into that area, I might sweep it. If he throws this one up, I might try to hit him over the top. But if he didn't get it into that area, I was able to bail out and play another shot because of the position I'd moved my feet into.

"I restricted myself on certain shots. You knew that the probability of risk would be too great against certain bowlers. For example, a left-arm spinner bowling to me as a left-hander, if he had a little bit of rough, I would take hitting from mid-off round to square cover out of the equation - unless it was short, and I could get back and create some space for myself to get it away.

"You also need different tempos during the day's play. You could have an initial period where you might have to get rid of a few fielders from around the bat - an initial risk that, once dealt with, you could settle into a period of play where you didn't have to take as many risks.

"Different players within a team will want to play in different ways. Some will naturally want to be more aggressive. But if you're a good player and you're in, you need to remember how hard it can be for the next player to come in and get a start. That's why wickets often fall in clusters.

"Often a team may only have two big opportunities to have two big partnerships in their innings, so if it's your day, and you're in, you have to really make sure that you do make it count."

Great players of spin, like Brian Lara and Mahela Jayawardene, would never let an opposition bowler settle. They might only take singles at times, or the occasional two, but the initiative is never ceded.

"You have to be active and busy, and show intent," advises Thorpe.

"Intent is not just charging out of your crease. It can be body language at the point of the bowler's release; you can pretend to come down the pitch, to put some pressure on them.

"Mike Gatting used to do it very well - he would duck his shoulder in his stance, as if he were coming down the track, and when the bowler would then drop it a little short he could step back and put it away.

"You need cards in your back pocket and to be able to bring them out when you need them. Be confident in your ability. Be calm in defence; have clarity about your acting strokes.

"A good finger spinner will have different flight and different trajectory. He can release the ball from different places, and at different paces. He can change the angle he hits the crease at. Then you have leg-spinners, when you're trying to pick the ball out of the hand.

"You have to practice watching them a great deal. You can often pick up little clues from how the ball may rotate. You may pick it out of the hand; if not, you might guess from the trajectory of the ball. You might be able to work it out from the way it is moving through the air."

In Ahmedabad the turn was slow and low; in Mumbai, sharp from the start. Subcontinent pitches will spin more than English pitches, but it isn't a simple equation.

"When the ball turns, the angles change, so that when you're batting the area where you can hit the ball changes," says Thorpe. "The difference in how the pitch will play in first and second innings can require you to have two different ways of playing.

"Second innings, when the turn is sharper, it might be much harder to hit the ball down the ground. Then you need to be good at moving your feet to get to the pitch, or you then have the sweep - but you need to practice the sweep really well for it to work."

Thorpe spent the first part of the winter at the national academy in Loughborough before travelling to India with the performance programme.

To simulate turning pitches on the indoor surface at home, he would create rough in the nets using pimpled rubber disks and cut-up chunks of carpet - "anything to make the ball behave differently to the normal surface it lands on".

He has even glued elastic bands onto cricket balls to create over-exaggerated turn and bounce ("it makes it crystal clear to the player that he can't just plop his feet and hands halfway forward") and studied the technique of Olympic fencers to see how another predominantly sideways sport produces such quick foot movement.

"We will use anything that might have relevance to a cricket shot," he explains.

"You make the work more challenging by adding in more and more. Make a player aware of what they can and can't get away with.

"Sometimes it can be overload, but it will bring clarity into a batsman's movements and decision-making. The more challenging you make the decision, the better they will develop.

"I might insist on target practice - one area on off side, one on leg side, mid on, mid off, and they're only allowed to hit those areas. No hitting over the top, no sweeping - purely for a practice drill, purely for footwork.

"A player has to work out for himself the danger and rewards for what he's doing. You're on your own out there - no coach can stand next to you out on the middle.

Watch the very best players and see what they do. If you can take 2% here and 2% there, it might work for you as well. I don't think you can ever stand still."