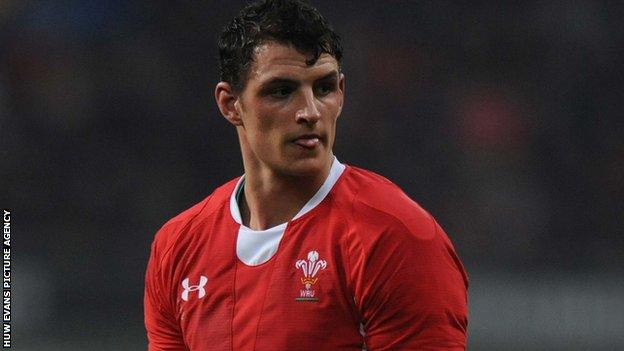 Aaron Shingler says he cannot wait to start for Wales in his favoured position of blind-side flanker against Australia.

The Scarlets forward has been selected ahead of ex-captain Ryan Jones in the Wales number six jersey.

He made his Wales debut at open-side against Scotland in the Six Nations and was an early replacement for Bradley Davies in the defeat to New Zealand.

"This is my preferred position," he said.

I think I play at my best at number six, so this is a good opportunity for me to perform well.

"I think I play at my best at number six, so this is a good opportunity for me to perform well.

"Playing six allows you to roam a little bit in phase play and get yourself in the wider channels and I like to think I can make a few line breaks out wide."

The 25-year-old, who will win his third cap against Australia on Saturday, has earned a reputation as a utility player who can cover any position in the back five of the pack.

He has played flanker, number eight and second row for the Scarlets and made his Wales debut at open-side flanker for the injured Wales captain Sam Warburton and his rival Justin Tipuric.

Shingler, who came on at blind-side against New Zealand when Jones moved to lock, admits he is determined to make the most of his opportunity.

"I wasn't even sure I was going to make the 23 (to face Australia), never mind starting, and the team was announced and my name was at six. I had a good smile on my face then.

"I was reasonably pleased with my performance (against New Zealand) because I hadn't played for a month before that.

"It was physically quite tough with match fitness but this week I had 80 minutes under my belt against the best team around.

"Hopefully, I can bring a real intensity to my performance this week."

Shingler, an impressive line-out operator, will join forces with Luke Charteris and Ian Evans in providing Wales with an array of different options for that facet of play.

He admits Wales have to be wary of the Wallabies but is confident they can grind out a much needed victory.

"They play the game at great pace," said Shingler.

"They are a pretty good team all round and it's a massive challenge. If we play well as a 15, we have every chance of getting a result."