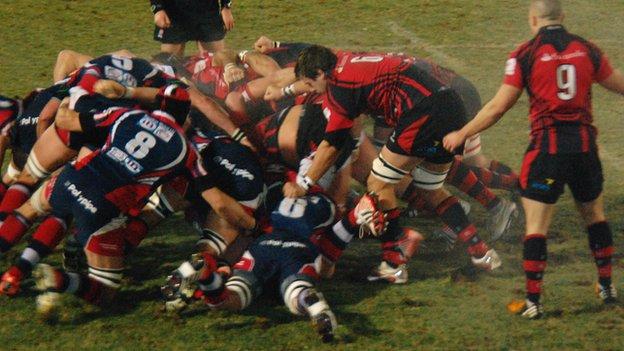 Doncaster Knights moved off the foot of the RFU Championship with a 22-17 win over Jersey, who go bottom themselves.

Centre Dai Bishop was sin-binned after just 30 seconds and Doncaster winger Tyson Lewis exploited the weakened Jersey defence to score in the corner.

The hosts stretched their lead straight after half-time with further tries from Rhys Buckley and Dante Mama.

The islanders hit back through Nicky Griffiths and Ed Tellwright but it was only enough for a losing bonus point.

Jersey's night had got off to a shaky start when Bishop was shown yellow in the opening minute for a blow to Knights scrum-half Chris Hallam.

Doncaster took advantage of the extra man when Lewis raced through to touch down.

But it was the explosive start to the second period that probably won the Yorkshire side the game.

Buckley's try following a line-out and driving maul and then, just a few minutes later, Mama's touchdown saw the hosts extend their lead to 22-3.

But Jersey were not going to go bottom without a fight and when Griffiths snuck round the blind-side of a scrum to touch down they were back in with a chance.

The islanders had to wait until stoppage time though for their second try when a quickly-taken line-out caught Doncaster off guard, and winger Tellwright eased in.

He then showed more quick thinking to convert his own try with a drop-goal and give Knights a few more nervy moments to play out before the referee blew his final whistle.

"I think we made far too many mistakes to win the game," said Jersey boss Ben Harvey.

"To open up with two sloppy scores in the second half like that, again through mistakes, you can't do it at this level, as simple as that.

"I thought we battled really hard for the bonus point, we've just got to catch a bit of form and make sure we keep working."

The result means Jersey drop to bottom of the table at the half-way point in the Championship season, while Doncaster moved above the islanders and Moseley into 10th spot.