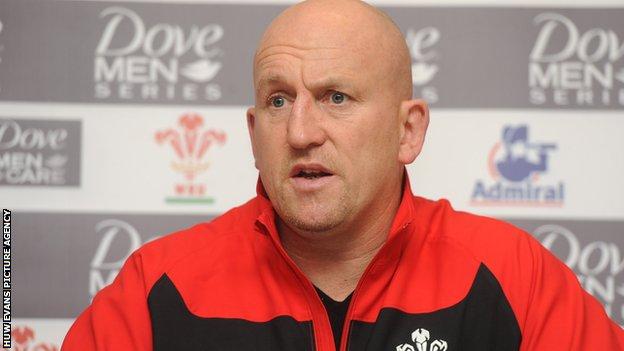 And victory over the Wallabies at the Millennium Stadium would prevent Wales falling out of the world's top eight.

"We want stay in the top eight if possible," said Edwards.

"We would be the only northern hemisphere team to beat one of the tri-nations teams. That would be a big feather in our caps."

Wales lost a series 3-0 in Australia in June 2012 and also went down to the Wallabies in the Rugby World Cup Bronze Medal Match in October 2011.

The Welsh team, who had only recently been crowned Six Nations champions, played well in Australia without actually winning.

"I know we didn't win a Test in the summer but it was the best results Wales have had in the southern hemisphere since professional rugby has come in," said Edwards.

"We are motivated as they will be - it's their last game of what has been a very long season for them and we are extremely motivated to get that elusive win.

"They are an outstanding team. They are playing at a very high level and they have got some superb players. They have got probably one of the best sevens in the world coming back in [David] Pocock."

Edwards admitted that injuries have been a key factor in the defeats to Argentina,Samoa and New Zealand.

Against the All Blacks Wales lost prop Aaron Jarvis (knee) and lock Bradley Davies (concussion) in the opening minutes, before Jamie Roberts also went off.

"We have come on the wrong side of injuries - there is not doubt about that," Edwards added.

"I think we have lost players in every single game in the first half. That definitely upsets your rhythm, particularly last week.

"We just have to realise the game is a little it more powerful and we have to muscle up in those areas - and I'm not talking about the Andrew Hore incident - and try and avoid those injuries.

"It has been a tough month because of the injuries we have occurred particularly last week.

"You can handle injuries in the week, but once you lose them in the games that is incredibly difficult."

Even though Edwards sees going out of the top eight a motivation for a win over the Wallabies head coach Warren Gatland has said it is not the end of the world.

Edwards said: "It won't be fatal if we drop out of the top eight. [But] if you are not in the top eight it could be a little bit tougher [in the World Cup]."