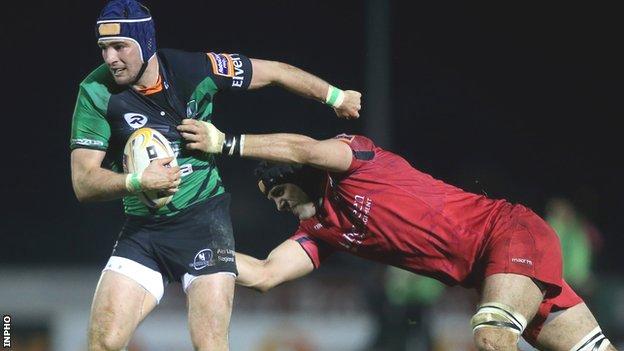 Edinburgh hung on for only their second away victory since January, outscoring Connacht by three tries to two in Saturday's Pro12 clash in Galway.

Tim Visser, Matt Scott and Stuart McInally all crossed for the Scottish side, with Willie Faloon and Danie Poolman touching down for the hosts.

Greig Laidlaw provided assists for the Scott and McInally tries and landed three conversions and a penalty.

Former Scotland fly-half Park finished with 13 points but that late drop attempt was the difference between defeat and victory.

One of Edinburgh's five returning internationals, Visser, swept through for an opportunist try inside the opening five minutes.

A poor pass from Parks put centre Poolman under pressure, the grounded ball was hacked on and Visser nudged it on to get the touchdown.

Connacht hit back, with a well-executed drive from a line-out from which flanker Faloon plunged over and Parks levelled with the conversion.

Some of that good work was undone though when Connacht infringed straight from the restart, allowing Laidlaw to kick the Scots back ahead.

Parks made it 10-10 with a 17th-minute penalty, but Connacht lost captain Gavin Duffy with an injury.

Edinburgh swooped for their second try shortly before the break, with number eight McInally securing clean line-out ball and Scott scoring off Laidlaw's well-weighted chip through.

A second Parks penalty cut the Connacht's deficit to 13-17 at half-time.

That was reduced to just one point when Parks added another penalty in the 58th minute.

However, Edinburgh kept up the pressure and it paid off when Laidlaw's inside pass put McInally over for a deserved score.

The conversion followed although Connacht had Edinburgh sweating in the final minutes.

A slick back-line move, with full-back Robbie Henshaw cutting a very good line, ended with Poolman scoring out wide. Parks swung over the conversion to make it a one-point game.

The last 10 minutes saw proceedings swing in Connacht's favour, but they failed to muster a match-winning score with Parks' drop goal attempt the closest they came.