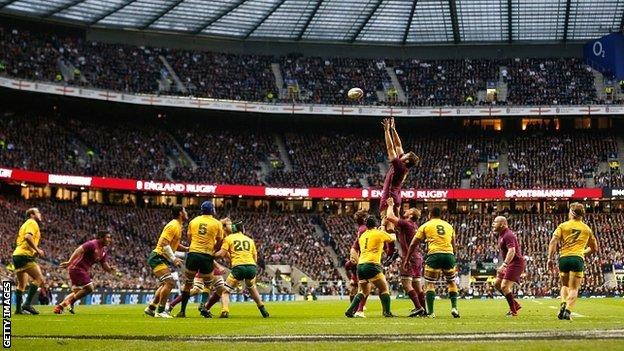 England will play Tests against Australia, Argentina and New Zealand on successive weekends in autumn 2013.

The Wallabies are England's first challenge on 2 November, before matches against Argentina and New Zealand on 9 and 16 November respectively.

England, who play New Zealand on Saturday, have won two of their last 11 home Tests against the Antipodean pair.

The southern duo are regular visitors, but it will be the first time Argentina have played at Twickenham since 2009.

England triumphed 16-9 on that occasion but were beaten 25-18 on the Pumas' previous visit to English headquarters in November 2006.

Argentina made their debut in the Rugby Championship - the new name for the expanded Tri Nations - earlier this year.

Despite losing five of their six matches, they drew 16-16 with South Africa at home in Mendoza and finished within a converted score of Australia in both their matches against the Wallabies.