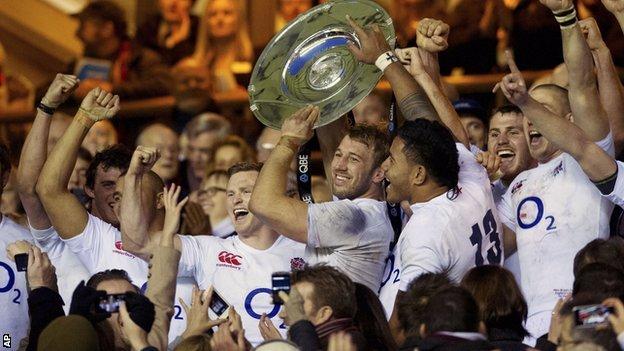 Sometimes, after a sporting result as remarkable as England's 38-21 destruction of world champions New Zealand, you have to fall back on cold, emotionless statistics to make sense of it all.

The trouble after a victory like the one Twickenham witnessed on Saturday afternoon is that there are almost too many magic numbers for the senses to cope.

Where to begin? Where to stop?

England beat the All Blacks about as often as Desert Island Discs changes presenters. Never have they done so with the swagger and superiority of this entirely merited margin.

Their previous biggest win over the side was 13 points - in January 1936.

They have scored 30 points in the fixture once before, but in a game won by three. That they won here by 17 is unprecedented not just for the hosts but also, almost, for the visitors. Only once in 498 Tests have New Zealand been beaten by a bigger margin.

England had lost the last nine contests between the two, only getting within 10 points in one of those defeats. Even in their previous win - in Wellington 2003 - they clung on by a mere two points.

The All Blacks were unbeaten in 20 matches stretching back to August 2011 and hadn't lost a Test to European opposition on an autumn tour in a decade. They hadn't been held scoreless at half-time this century.

If, with all of that to chew on, you still saw this scoreline coming, then you are either congenitally prone to wild fancy or ending the weekend rather richer than you began it. The All Blacks were available at 1-16 at one stage before this match, the sort of odds that tempt only lunatics but do as much as any other stat to underline the magnitude of this upset.

One could go on. England began this match with fewer international caps between them that the opposition front row. They had managed only one try in the last three meetings, and yet produced three in nine second-half minutes.

So where was it won? In all departments, England were demonstrably superior - at the scrum, in relentless defence, at the All Black speciality of the breakdown.

"I can see this being maybe the greatest England victory, ever, at Twickenham. Nothing is springing to mind where they have annihilated the world's best team as they have today.

"England harried, hounded and were just relentless. They said to New Zealand 'we will tackle you wherever you go and then we'll pinch the ball and see if we can live off scraps'. New Zealand cracked.

"I think I have been to every single England game at Twickenham since I was 14. This was by far the best game I've seen. It's the best performance by an England side considering the opposition and considering what this team has been through, particularly over the last two weeks."

They came out of the traps fast, accelerated, and then had more in the tank when the hard yards beckoned as two rapid All Blacks tries turned a 15-0 lead into a one-point game with half an hour left.

In contrast to the last two weeks, they took points when territory and possession merited it and exploited weaknesses in the opposition back line with ruthless intent rather than running into walls.

Even in the basics there was stellar improvement, exemplified by Ben Morgan's fine work at re-starts and the flat pass in front of Manu Tuilagi that Brad Barritt threw to set up his own try.

Throughout the team there was excellence. Tuilagi's two breaks, three off-loads and 95 metres with ball in hand - more than any other player - were robust rebuttal of those who have criticised his creativity; Barritt's try and 12 tackles gave him his best afternoon in an England shirt.

In the second row, Joe Launchbury's 14 tackles and big-match maturity belied his 21 years; Geoff Parling's unblemished line-out takes, including the one that led to Chris Ashton's try via Tuilagi's burst - and work in the loose - underlined his emergence as a lock of international class.

Yet perhaps more impressive than any individual was the collective response with the score at 15-14. Many teams would have folded; England teams of recent vintage almost certainly would have done. To instead pile on 20 points in the next 14 minutes was a reply to end all argument.

Did the sickness bug that went through the Kiwi camp in midweek leave them weakened, as some cynics claimed?

No-one in a black shirt was taking that line. "I don't think so," said captain Richie McCaw. "Had we fallen off at the end then we could have blamed it. I felt fine in that department."

His coach Steve Hansen was even more forthright. "We don't have an excuse. We just got beaten by the better side.

"England's win was thoroughly deserved. They played some magnificent football. We had 80 minutes to do our best, and we got beaten by a side that was better than us."

New Zealand's stars new and old were barely recognisable from their all-conquering form over the past 16 months, their tribulations exemplified by their leading man.

Dan Carter averages almost 19 points a game in his unbeaten career against England. Here, he blew two straightforward penalties, missed three tackles and made just 11 metres in six dashes with ball in hand.

As a unit his team-mates conceded 13 penalties, missed 18 tackles and were turned over 13 times. Neither did those errors simply materialise in the icy December air. England, unstinting, forced those much-heralded hands.

"I find it interesting that everyone here is surprised by their team," Hansen said pointedly afterwards. "This is a good team. They've shown how good they can be, and if you back them, it'll make them even more dangerous."

Coach Stuart Lancaster was harried a week ago after defeat by the Springboks followed failure against Australia. On Saturday night, after the best result of his short career, he could not have been in a more contrasting mood.

"I'm a very proud England coach tonight," he admitted. "To get a scoreline like that against a team like that is a great testament to these players.

"This gives the players a belief in the direction we're going, and hopefully gives the rugby public the sense that the journey we're on is the right one."

It has been a testing autumn for the head coach, the optimism of spring giving way to dark pessimism as his side spluttered and played only in patches.

There is a still a sense that this result has to be a launching-pad for this team rather than a glorious blip. With last season's Grand Slam champions Wales in disarray and the other northern hemisphere nations struggling against the southern hemisphere, Six Nations success will have to follow for all to be convinced.

Equally, after a chastening last six months, England and their supporters should also be allowed to celebrate this victory in its splendid isolation.

Just over a year ago, one of these sides was being crowned world champions in front of its adoring public, the other slinking home.

To turn that around, against the weight of history and sane probability, is worthy of great praise.